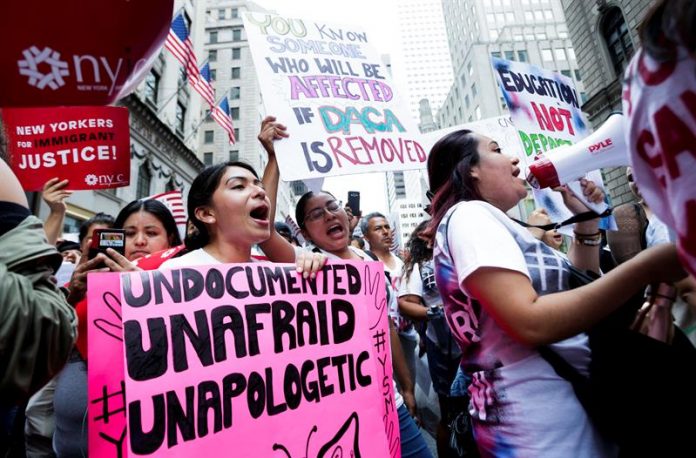 Thousands of people today took to the streets of New York to protest against the termination of the DACA program announced this week by the Trump Administration, a measure that will affect its more than 800,000 beneficiaries, young immigrants known as dreamers.

“If you do not let us dream, we will not let you sleep” or “Save the American Dream” were some of the slogans that carried the protesters, quantified between 2,500 and 6,000 by the authorities and summoned this afternoon through different internet events in front of the Tower Trump, near Columbus Circle.

Last Tuesday, Attorney General Jeff Sessions announced the end of the DACA, promulgated in 2012 by then-President Barack Obama, although the suspension will not be valid for up to six months, period which Congress has to regularize the situation of the “dreamers”.

Since the announcement, there have been protests at different points in the United States. in defense of the program, which has prevented the deportation of thousands of undocumented young people and has allowed them to study, work, obtain driving licenses and legally travel within the country.

The demonstration on Saturday is a response to the arrests of 9 “dreamers” and 25 other sympathizers of their cause that took place the same Tuesday in an act of civil disobedience in New York, said in a statement the pro-immigrant movement Movement Harvest, one of the organizers.

During protests today, protesters took an eleven-minute sit-in to the 11 million undocumented immigrants currently estimated to be living in the United States to call for “protection, dignity and respect” for the immigrant community.

“We are furious over all the undocumented youth who have not yet reached 16 and are waiting to apply for the DACA. We are furious at all DACA parents who can lose the work that supports their family,” said Thais Marques, a spokeswoman for the organization, in the document.

Nevertheless, Marques emphasized the “strength and resilience” of the immigrant community and assured that his qualities “have never been dependent on a work permit.”

This was corroborated by the participants in the protest in Central Park, whose banners read “We will not go”, “the US works for the immigrants” or “Stay with the children and deport them. racist “.