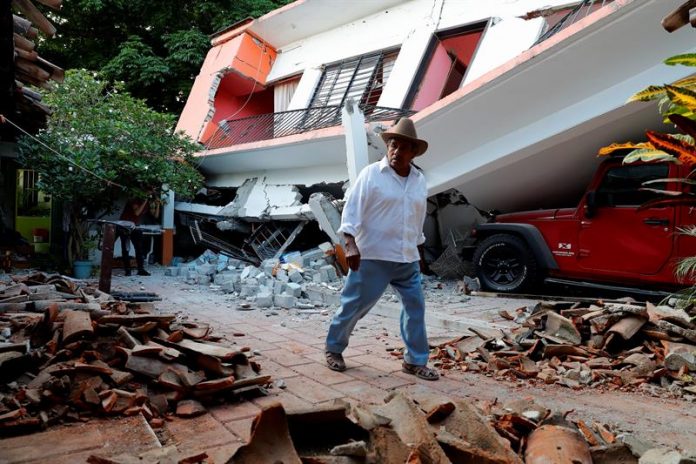 The death toll from last Thursday’s earthquake in Mexico rose from 65 to 90 this morning after Oaxaca’s governor, Alejandro Murat, reported that only 71 deaths were reported in that southern state.

“In an evaluation meeting the governor Alejandro Murat reveals that the number of deaths by earthquake increased to 71,” said the Secretariat of Civil Protection of Oaxaca in a message spread through the Twitter network.

At the same time, Rosario Robles, Secretary of Agrarian, Territorial and Urban Development of the Federal Government, said in an interview to Milenio Television that this Saturday accompanied the Oaxacan governor on a tour of several municipalities of the state.

When asked if there was a confirmed number of fatalities, the official said: “We have 71 people dead, but we still have to confirm.

On Saturday, National Civil Protection coordinator Luis Felipe Puente said in an interview with the media that the preliminary balance of the earthquake was 65, “of which 15 in Chiapas, 46 in Oaxaca and four in Tabasco “.

According to state and municipal sources, the Oaxacan municipality of Juchitán de Zaragoza remains the most punished with about 60 dead. However, they caution that the figures remain preliminary.

The National Seismological Service (SSN) said in its latest report that up to midnight on Saturday there were 846 aftershocks of the quake of magnitude 8.2 on Thursday night, which originated off the coast of the southeastern state of Chiapas.

The agency also issued a special report in which it reported an unusual magnitude 2.6 earthquake registered at 21.54 local time on Saturday (02.54 GMT on Sunday), which was located three kilometers southeast of Tlalpan in Mexico City .

“Although the magnitude of the earthquake is low, it was felt strongly in the southern area of ​​Mexico City due to the proximity of the epicenter,” said the SSN, adding that some minor damage has been reported in the area.

So far it is unknown whether this tremor is related to Thursday, but both share the peculiarity that occurred in the interior of their respective tectonic plates (the one of Cocos in the case of the registered one against Chiapas, and the one of North America in the of Mexico City), and not in the borders between plates, where earthquakes usually originate.