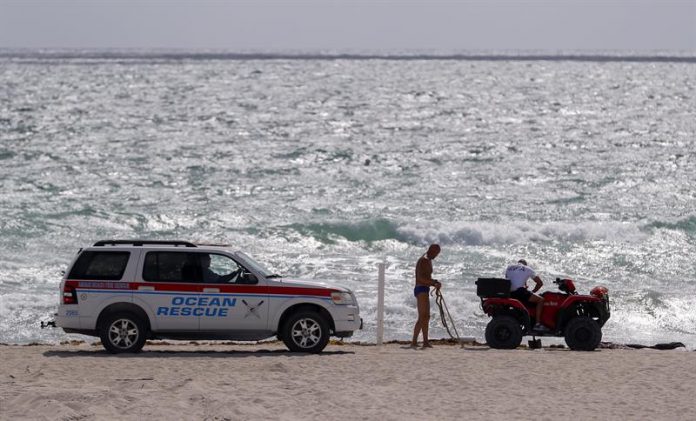 Three active hurricanes in the Atlantic basin keep the Caribbean islands, Florida and eastern Mexico in vilo: Irma (category 4) moves toward that US state, Jose (4) is approaching the smaller Antilles and Katia (2) will play soon Mexican lands.

According to bulletins published by the US National Hurricane Center (CNH). at 2100 GMT, Irma is causing hurricane winds in Cuba and central Bahamas, and has prompted the expansion of Florida areas on alert.

Its center is expected to continue to advance near the north coast of Cuba and central Bahamas tonight and Saturday, and turn northwest toward the end of that day, bringing it closer to the Florida Keys and South the peninsula on Sunday morning.

The CNH warns that Irma will maintain its category 4 when approaching Florida. At the moment, its hurricane winds are perceived 70 miles (110 km) from the eye of the hurricane, although gusting gusts equivalent to those of a tropical storm can be seen up to 185 miles (295 km).

The area under hurricane warning, which includes the entire southern peninsula and the cays, has been extended northward along the east coast to Sebastian’s cove and along the west coast to the island of Ana Maria.

The area under hurricane alertness reaches as far as the Suwannee River, on the west side of the Florida peninsula, while the area under alert for sea level rise has also expanded northward.

“Near the coast, the rise of sea level will be accompanied by large and destructive waves,” adds the CNH.

The Cuban provinces of Camagüey, Ciego de Avila, Sancti Spiritus, Villa Clara, Guantanamo, Holguín, Las Tunas and Matanzas, as well as the center and northwest of the Bahamas are also on the alert.

According to the CNH, hurricane winds will be felt in Cuba until Saturday, as in the northwest of the Bahamas, while in southern and central Florida, including the cays, on Saturday night and early Sunday.

Do not rule out the production of tornadoes on Saturday morning in South Florida.

Given the strength of this hurricane, meteorologists urge to finalize the preparations to avoid damages as much as possible, although they expect Jose to turn northwest this evening, which could reduce his strength ahead of the weekend.

Katia, category 2, is about 120 miles (195 km) southeast of Tampico and will land between this night and early tomorrow on the Caribbean coast of Mexico, where it could arrive accompanied by a strong surge.

It is expected to rapidly weaken as soon as it hits the ground, according to the CNH, which says its strong winds are up to 70 miles (110 km) from the eye of the hurricane and are expected to raise sea levels between 5 and 8 feet (1.5 and 2.4 meters) in the area in which it touches earth and something further north.

Katia is expected to leave strong 10 to 15 inches (254 to 381 mm) precipitation over northern Veracruz, eastern Hidalgo and Puebla, as well as between 2 and 5 inches (50 and 127 mm) above southern Tamaulipas, east of San Luis Potosí, west of Hidalgo, east of Querétaro and south of Veracruz, although it could be the case of up to 635 millimeters in northern Veracruz, eastern Hidalgo, Puebla and San Luis Potosi.