Juchitán was silent after the earthquake of the century in Mexico

A thick silence, like a mixture of mourning, trauma and uncertainty, has taken possession of Juchitán de Zaragoza, the Mexican municipality most impacted by the powerful earthquake, the largest since 1932, which shook southern and central Mexico on the night of Thursday.

“It is very sad for the event and it is perhaps the most catastrophic event that Juchitán has had (the city) is destroyed and where we walk is the friend or neighbor who lost his home.It is very sad to know that where you go, Juchitán is in ruins, “Edgar Mario told Efe.

He was one of the curious gathered on Friday night, 24 hours after the event, around the Navy, Army, Civil Protection and volunteer firefighters who work in the search for victims and removal of debris from the Municipal Palace.

This building, once famous in this city of the Isthmus of Tehuantepec, in the southern state of Oaxaca, is today a sad symbol of the serious impact that has had in this humble municipality the earthquake of magnitude 8.2 on the Richter scale.

According to the official count, in this municipality there are 36 dead, most still under the rubble, 7,000 homes affected and thousands of people affected by sleeping outdoors.

Perhaps for this reason, the people crowded with an unusual solemnity, without a word, in front of the Municipal Palace, and followed with interest all actions of the authorities.

The silence and the anxiety is breathed in this locality of about one hundred thousand inhabitants and that registers 36 of the 61 died by this strong earthquake, becoming the epicenter of the tragedy by the number of fatalities.

The most affected area is the center of the city, where light comes and goes and the water service has not been restored.

For neighbors, this is a minor evil, because they have spent the last hours sitting in front of their houses or in an open-air hostel that the authorities have enabled and where they offer a mattress to rest.

In these places there is hardly any talk and there is sadness and consternation.

The population in general lives with panic replicas of the telluric movement, which are repeated many times per hour and feel intense.

Although on the streets tonight there was a certain movement of people, cars and mototaxis, almost all of the businesses were closed in this municipality as well as in the neighbors Salina Cruz and Tehuantepec, all of them playing in the Pacific.

In the center, the general halo was that of ghost town, or in state of siege. 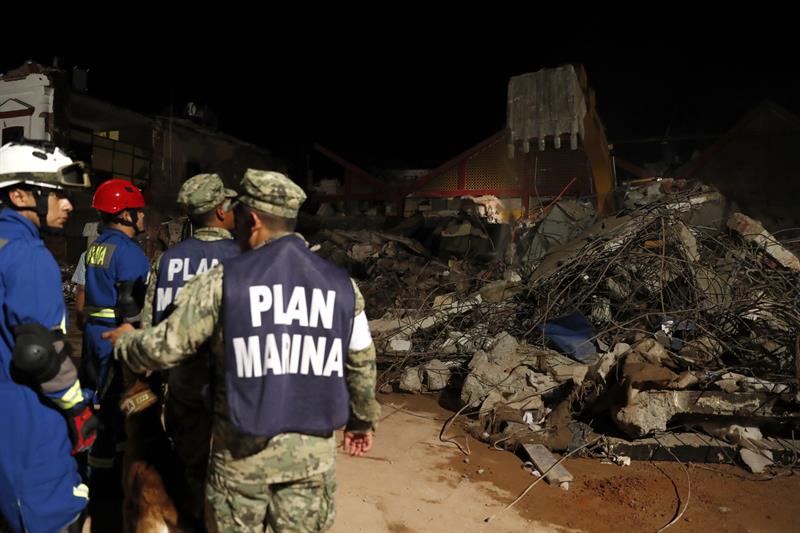 The earthquake caused the windows and windows of many establishments to burst, which today have not opened for fear of looting in the absence of water and food.

This is the scenario of chaos that is lived in this Oaxacan municipality, one of the poorest states of the country but also recognized for its history, its folklore and its indigenous essence.

Fortunately, not all the Pacific coast of Oaxaca was affected in the same way by this great earthquake that impacted in more than ten states throughout the country and felt up to 50 million people.

The town of Huatulco and much of the road between this tourist resort and Juchitán, about 200 kilometers, was in perfect condition.

However, near Juchitan there were dangerous landslides and large rocks in the middle of the road, which did not prevent trucks and buses from passing through.

On the contrary, the buildings and dwellings, of cement, wood or aluminum, constructed next to the road axis did not show more damages.

“Thanks to God, it was the nerve and the fear, nothing more,” explained Mario Luis, a taxi driver from Huatulco, who today changed his usual routes to transfer journalists to Juchitán de Zaragoza, involuntary protagonist of this terrible earthquake.

Striker Jozy Altidore, who scored the first goal of the United States in the final of the fourteenth Gold Cup, said his team was...

Government manipulation on social networks grows, according to a world report

Many governments around the world have "drastically" increased their attempts to manipulate information on social networks, which contributed to making this the seventh consecutive...

Delray Beach revives “Beatlemania” in a festival of tribute bands

Miami (EFEUSA) .- The peaceful town of Delray Beach, in southeastern Florida, hosts an international festival dedicated to The Beatles from Friday, with more...

To 12 days of turning 58 years, the health of the Argentinean Diego Armando Maradona has returned to wake up uncertainty after a video...

The mayor of New York, Bill de Blasio, has announced that the City Council will break "all the contracts" that it currently has with...