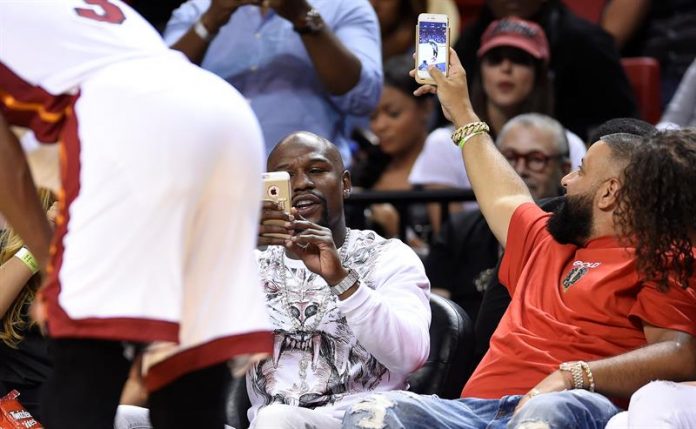 Until the very last moment, American fighter Floyd Mayweather Jr and Irishman Conor McGregor, mixed martial arts fighter, have taken advantage of every presentation before the journalists not to give spectacle and to promise each of them the triumph.

After a series of press conferences, attended by thousands of people in various cities and in which there were all sorts of insults, curses and pure ticket sales promotion and pay TV, Mayweather junior and McGregor were Faithful to that strategy until the end.

In the last contact with the journalists before the fight, scheduled for next Saturday, McGregor acknowledged: “We have done many crazy conferences, but this one is more moderate, more professional, it’s how I really like it.”

This confirms that for months began the circus in which they have converted from the beginning a combat, that now until the own Association of Doctors who work in the fights have openly declared that it is a “danger”, especially for McGregor, that never Has boxed and is going to face an undefeated former champion.

Even more so when gloves are also allowed to be eight ounces instead of the regular 10, so that fighters can do much more damage.

But the fight will take place at the T-Mobile Arena in Las Vegas, where, since last June when the Nevada Athletic Commission approved it, no one talks about any sports aspect but simply the millionaire profits they expect to leave the event .

Within the boxing world they have already tired of repeating that it is all a “farce”, a “circus”, and a lack of respect for its foundations that have been “trampled” by the Nevada Athletic Commission itself, ultimately responsible for Can be celebrated.
The bout is scheduled for 12 rounds in the junior media division.

But although McGregor said the conference had a serious tone, he could not escape the insults that during his tour made in the previous ones and that turned into a spectacle considered by the great majority of “very bad taste and education”.

However, in their line also to give the last aid to the ticket sales that has not yet been completed, both fighters were again insulted.

McGregor boasts 29 years of age, while Mayweather is already 40 and is emerging from a voluntary withdrawal of two years of inactivity.
McGregor recalled that in addition to his age and fitness and preparation, the weight of the gloves will favor him, as they will be eight ounces instead of standard 10 oz gloves for fights of more than 147 pounds.

McGregor (0-0) was awarded the fight with eight-ounce gloves as he is accustomed to fighting four ounces in the UFC.
But Mayweather (49-0, 26 KOs) is unhappy and said at the conference that allowing eight-ounce gloves “made a big mistake.”

Point of view also recognized by the doctors who supervise the fighting.
“Although it’s supposed to be that way he can do better, he’ll make it easier for me, and I do not see (McGregor) being able to stand up to two rounds,” said Mayweather junior teasingly, responding to the Irishman’s comments.

“I feel happy, because regardless of how you keep your guard, I’m going to break whatever’s in front of me. That’s all.”

“I’m going to get into his game, and when that happens I’m going to feel sad because he should have kept his mouth shut, since he’s not at my level, not even a quarter of the kind of man I am,” added the former champion American.

The fight, which has generated controversy in the boxing arena because many say that does not make sense that kind of fighting, for Mayweather does have it, as he left his retirement to climb back into the ring and credited a bag of possibly more than 250 Million dollars he won when he unified the welterweight title against Filipino Manny Pacquiao.

He said that “everyone can talk about what is going to happen, although what is not going to happen is about me and the guy against whom I am competing, but it is clear that with my 49-0 mark, I will give everything to continue unbeaten”.

“I know I’m the best at what I do, and McGregor in the Octagon is like me, he’s also undefeated, so the public will be the first winner to watch this great bout,” he added.