The collegiate union that groups journalists in the Dominican Republic and its affiliates in different parts of the United States, will make according to its bylaws their elections this 25 of August.

Miami, Fla.- The Dominican School of Journalists Section, CDP, in the state of Florida, is preparing to elect its new authorities according to the statutes of the guild and which will be held concomitantly with the Dominican Republic, this August 25 And where so far only the “Renovación y Progreso” Plan has been presented, headed by Marcos A. Tejeda, attached to other prominent journalists.

The journalists registered in the voter registry will be able to vote in the premises occupied by Lantigua Tax Service, located at 2290 NW 28st, Miami Florida, zip code 33142 in the Allapattah sector.

Knowing the distances in Miami, the Electoral Commission presided by William Lantigua, determined that “voters can vote through electronic means, sending an email to lantiguatax@gmail.com. In order to have the right to vote in addition, members of the Dominican Association of Journalists must be up to date with the payment of the CDP membership fee and pay US $ 10.00 for this day. The Election Commission is in charge, in addition, Yunis Segura and Annie Jiménez
Revised Standard Electors in Florida.

Meanwhile, the former president of the Dominican College of Journalists in Florida, Rose Mary Santana, says that about the revision of the electoral register, which has been requested by members of the organization, “the authorities are waiting for The corresponding review in each case, since some colleagues registered in the Florida Padron, have moved from jurisdiction and even, there are names of colleagues who have already died, but that the authorities work to regularize this anomaly, “he says.

The unitary board that aspires to direct the destinies of the Dominican College of Journalists in Florida, is headed by Marcos A. Tejeda, while also include Jesús M. Rojas, nominated as Undersecretary, Mayra La Paz, in the secretariat of organization , Ana Lucia Ortega, in the finance department, Rose Mary Santana, in Public Relations, Rubén Morillo and Vanessa Rivera, as vocals.

Marcos Tejada, urged members of the CDP to “vote in a massive way for the plan we are leading. Accompanied by other important and outstanding members, we have a work program to develop that, with the help of all, will give new life to the guild, contributing our human and professional resources in favor of our journalistic class. ”

“We have agreed with the past president of the CDP, Rose Mary Santana, to continue with the work program developed by her past efforts, especially in the educational field, which also includes the signing of an agreement with the Knight Center for Journalism of the Americas located at the University of Texas and another with Isaac Newton University in Costa Rica through its Rector, Greivin Arrieta Chacón, who visited the main headquarters of the CDP in the Dominican Republic and of course, with a university Key to us as UNICARIBE COLLEGE, through its President and founder, the teacher José Alejandro Aybar Martín. ”

“An important point within our objectives is to defend democracy in the region and press freedom, not only as part of our proposal, but as essential entities in what are the objectives of the Dominican College of Journalists, CDP. To this end, we will also strengthen relations with colleagues from different journalistic organizations in the State of Florida, “according to the renowned journalist who, if favored by his colleagues, will be the next president of the CDP branch in the state Of Florida. 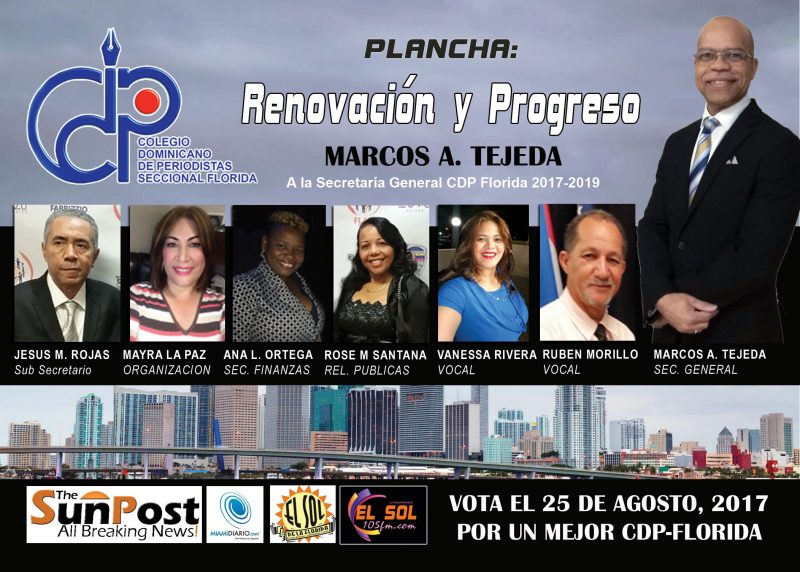 “We hope that by Thursday, we will have ready and corrected the Electoral Register of our subsidiary, so that the election process is a success,” Tejeda said.

If Tejeda wins the necessary votes, he replaces his colleague Tony Castellanos, a longtime journalist and experience who has held the position for two years.

Other journalists who have occupied the position since the creation and subsequent approval of the guild in Florida are, in addition to Rose Mary Santana, are the prominent writer José Carvajal, Juan Colón, Miguel Acevedo, Pablo Rodríguez, Martina Soriano.

While other prominent communicators who have emigrated from the Dominican Republic, such as Yaniris Felipe, Wendy Arias Mercedes, Anna Jiménez, Guerrero France, educator Santiago Nuñez, among others, are part of the guild and although they are not on the plate for reasons of Work, “will join the work of the Plan Renewal and Progress and the welfare of its journalistic class.”

Irma degraded herself today in a tropical storm as she heads north along the west coast of Florida, the US National Hurricane Center (CNH)...

The Real Madrid coach, Zinédine Zidane, did not want to go too deeply into the postponement of the Classic that was to be played...

Barack and Michelle Obama will produce films and series for Netflix

Former President Barack Obama and his wife, Michelle, have signed an agreement with Netflix for several years to produce films and series that will...

Disney and 21st Century Fox ready to announce agreement on Thursday, according to CNBC

The Walt Disney group and the 21st Century Fox consortium are in the final stages of the deal they are negotiating and could announce...

A Bostonian woman returned more than one million dollars that TD Ameritrade Bank mistakenly deposited into her account when she confused her with another...