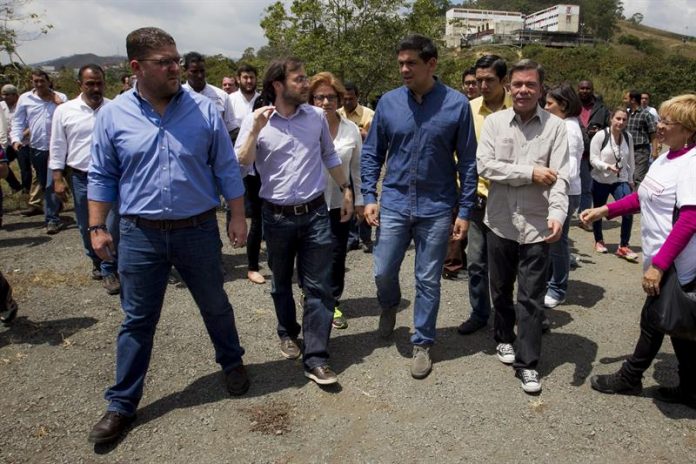 The “persecution” of opposition mayors in Venezuela “has escalated” in recent weeks, as the election on Sunday of the National Constituent Assembly promoted by the government, denounces the councilor of the city of Lechería, Gustavo Marcano .

“With the activation of the fraudulent constituent process has escalated the persecution. We have been taken to the illegitimate Supreme Court more than twenty mayors in the last weeks, I was the first,” Marcano explains in an interview with Efe in Washington, after fleeing Of an order of fifteen months’ imprisonment.

Two weeks ago, he relates, mayors of opposition parties to Chavismo began to be summoned to hearings in the Supreme Court for failing to comply with their orders to avoid holding protests in their municipalities by the Constituent Assembly, which was installed in Venezuela on Friday with the mandate To draft a new Magna Carta and to restructure the State.

“We protested because it is a right, we fully comply with the precepts established by the Constitution. We act under the articles of the Constitution that establishes that every citizen has the duty and the right to contribute to the restoration of constitutional order,” he says.

Marcano disregarded the Supreme Court’s mandate, which he considered “an appendage of the regime,” allowed the protests and participated in the marches of his municipality, Diego Bautista Urbaneja, located in Lechería, in the state of Anzoátegui (eastern Venezuela).

He then refused to appeal to the Supreme Court on the grounds that the only judges he recognizes are those he named last July 21 in the Venezuelan National Assembly, where the opposition has majority since January 2016.

Marcano managed to leave Venezuela “by non-traditional ways” that he prefers not to reveal, since they are “the same”, he says, using “hundreds of people persecuted by the regime of Nicolás Maduro.”

On Wednesday, he arrived in Washington to meet the Secretary General of the Organization of American States (OAS), Luis Almagro, who in the last two years has received many Venezuelan opponents in his office and is one of the most international voices. Reviews with Maduro.

“We have presented a report on the persecution, which has been escalating in recent weeks, but has always existed. We have mayors jailed since 2014, but with the Constituent Assembly there has been an escalation to paralyze protests in our municipalities,” he says.

“Almagro – he continues – is very aware of the situation we are suffering in Venezuela, he is very well informed. He listened very carefully to each case.

The Uruguayan diplomat, as usual, reported the meeting with a photo and a message on his Twitter account: “Meeting with the Mayor of Lechería, Gustavo Marcano, on the persecution of mayors and governors by the dictatorship of Venezuela” .

In addition to that interview, Marcano maintained other contacts in Washington to “seek protection from mayors who have similar processes open” through human rights bodies, although for the moment it has not initiated any proceedings in the Inter-American Commission on Human Rights (IACHR) ), An organ belonging to the OAS.

“For now I have to stay here and continue to fight for freedom and change in Venezuela. The people will continue to resist all the attacks of the dictatorship, we want free elections with a National Electoral Council appointed by the National Assembly,” he concludes. .