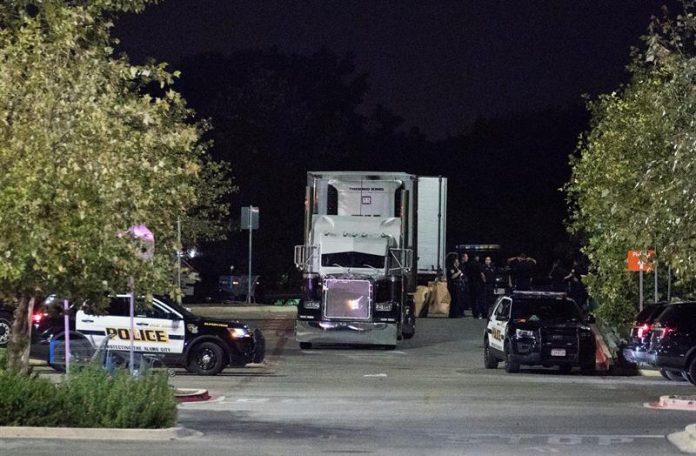 The Mexican Consulate in San Antonio, Texas, reported today that 14 of the survivors of the tragedy in which 10 people died, seven of them Mexican, inside a trailer will participate as witnesses in the trial that will follow the driver .

“We are using all the means at our disposal to offer assistance to Mexican survivors, in particular benefits under US law as material witnesses,” said Nuria Olascoaga Rosas, a press spokeswoman for the Mexican Consulate General in San Antonio.

Olascoaga alluded to the legal process that will follow James Bradley, 60, a native of Clearwater, Florida, the driver of the truck where on Sunday were found 39 immigrants locked up and without ventilation inside.

Earlier that day, police found the lifeless bodies of eight immigrants inside a truck in the parking lot of a Walmart store in San Antonio, Texas, after an employee alerted a person Who seemed disoriented had asked for water.

The consular official said that according to updated data, 34 of the 39 abandoned people are of Mexican nationality, of which seven died and 27 were hospitalized.

He added that there is a minor who is under medical supervision in one hospital and another, who has already been discharged, has been made available to the state of Texas.

According to Olascoaga, the Mexican consulate in that jurisdiction, together with several charities and activists, are in charge of providing legal assistance.

“Until now, the information that we have been given by the immigration authorities, who have committed to analyze case by case, is that none of these people are in the process of deportation,” said the official.

Regarding the possible repatriation of the bodies, she indicated that the head of this consular office, Reyna Torres Mendivil, has received the support of the Mexican Foreign Service Protection Directorate of Mexico’s Foreign Relations Secretariat (SRE).

“We are trying to take note of this situation and to process the corresponding humanitarian visas in Mexico for those who want to come to see their relatives hospitalized or deceased in San Antonio,” he explained.

Olascoaga also said that according to documents and testimonies of the survivors, ten of these immigrants come from the Mexican state of Aguas Calientes, while the rest are from Veracruz, Zacatecas, Oaxaca, Michoacán, San Luis Potosí, Jalisco, State of Mexico, between others.

“Thirteen of the survivors are still under medical observation in the area’s hospitals. Two of those still dead are still to be found at Bexar County Medical Examiner’s office,” he added.