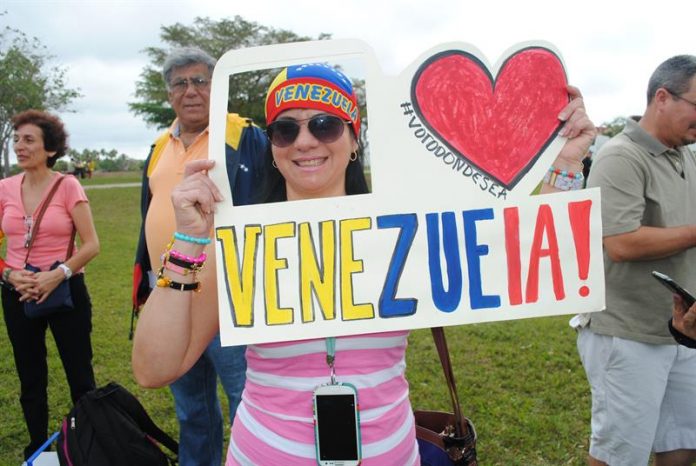 The Venezuelans in Florida today started early to support with their vote the consultation promoted by the opposition Venezuelan Parliament, with which it seeks to express its rejection to the National Constituent Assembly promoted by the Government of Nicolás Maduro.

Beatriz Olavarría, of the Electoral Commission in South Florida, told Efe that Venezuelans are coming out to vote copiously since the early hours of the morning because they know that it would be unheard of not to respond to the fight and the crisis faced by their relatives in the country.

The exile was excited that Venezuelans can vote in at least thirty polling stations in the state, especially when immigrants have had to move in the last elections to the Venezuelan Consulate in New Orleans after the closure In 2015 of the headquarters of Miami.

Olavarría, who predicts a mass vote, criticized Venezuela’s voter registration stalls for 100,000 foreign voters when more than two million Venezuelans are eligible to vote, many of them in the United States.

Meanwhile, Florida Gov. Rick Scott reiterated on his Twitter account state support for Venezuelans “while expressing their opposition to the Maduro regime.”

Scott had already emphasized the importance of participating in the consultation this week to send a “message of unity” to President Maduro and his “tampons”.

Olavarria, who toured some of the posts, said that despite rains in some sectors of Florida he observed long and fluid ranks to participate, especially in Doral and Weston, cities with a high concentration of Venezuelans.

Agglutinated in the Table of Democratic Unity (MUD) of South Florida, the popular consultation seeks to show Maduro the rejection of the Constituent Assembly and the desire of the Venezuelan people for free elections.

In addition to the positions of Coral Gables, Fort Lauderdale, Palm Beach, Orlando, Tampa, Sarasota and Jacksonville, among other cities in Florida, Venezuelans will be able to vote in Georgia, North Carolina and South Carolina, where they hope to delegitimize the constitutional change that It is proposed to carry out Maduro.

Through this consultation, under the Venezuelan Constitution, every Venezuelan, natural or nationalized, born before July 16, 1999 and only submitting his or her IC or Venezuelan passport, in force or expired, may exercise his right in any part of the country. world.