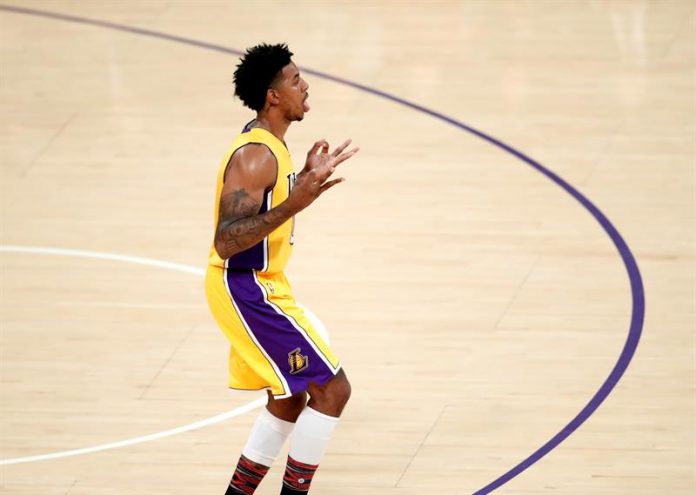 The Golden State Warriors returned to the moment of the transferences market when getting escort Nick Young, who left the Los Angeles Lakers, and joins the current NBA champions.

Young, 32, accepted a one-season contract and 5.2 million with the Warriors, where he is expected to be a major player in the reserves.

Young’s acceptance of the Warriors came after Israeli forward Omri Casspi also pledged to play with the current NBA champions.

Now, the Warriors also want to keep powerhouse free JaVale McGee with a new deal, although the player met today with the Clippers’ managers.

Young, a 10-year NBA veteran who played the last four seasons with the Lakers, averaged 13.2 points for the Lakers last season.

His Lakers coach, Luke Walton, is very close to the management and coaches of the Warriors and they were impressed with how Young worked under his direction.

The one who has no interest in changing cities is veteran escort Jamal Crawford, transferred by the Angeles Clippers to the Hawks of Atlanta, who also thought of the Warriors, but these could not give him the money he can collect if in the end manages to stay with The Lakers.

The angel team is interested in reaching Crawford so he can play base and help rookie Lonzo Ball, but whenever he can buy his contract or give up the Hawks and become a free agent.

With his Los Angeles-based family and a solid on-the-spot relationship with Ball, Crawford would like to sign as a free agent with the Lakers.

The Lakers are keen to sign Crawford as well, according to one source, and have the money to do so after leaving $ 17.2 million in the pay cap if Thomas Robinson, Tyler Ennis and Metta World Peace, as well as Young Leave the team.

Crawford could start as the Lakers’ base and be of great help as a mentor and gunner for Ball.

Meanwhile, the Clippers already have Italian forward Danilo Gallinari of the Denver Nuggets with them for a three-year, $ 65 million contract.

The Clippers, Nuggets and Hawks reached an agreement to send Crawford, Diamond Stone and a 2018 first-round pick previously purchased from the Houston Rockets and cash to the Hawks.

Atlanta will send a second selection of the 2019 previously acquired to the Washington Wizards to Denver to complete the agreement.

The team is trying to rebuild the squad following the departure of star base Chris Paul. Gallinari is a special shooter that the Clippers have coveted for several years.

Inside the Eastern Conference, the current champions, the Cleveland Cavaliers, have been more topical by the names that the team did not sign (Paul George and Chauncey Billups) that by the names that contracted (the Spanish base Jose Calderón and the escort Kyle Korver).

However, the Cavaliers have already confirmed that veteran forward Richard Jefferson, 37, key as reserve, confirmed that he will return with the team next season, which will be the seventeenth as a pro.

Jefferson will receive a salary of $ 2.5 million, the minimum for players who have been in the NBA for more than 10 years.

If Jefferson had retired, with which he has flirted openly in the last two seasons, the Cavaliers could only fill their squad with all or part of the exemption from the average tax level (5.2 million) or with a Minimum veteran contract.

Meanwhile, free-agent base Dion Waiters also reached a deal for a four-year deal with the Miami Heat, a team he came in last season after leaving the Oklahoma City Thunder.

Waiters rejected a player’s choice of a little more than $ 3.2 million left for the contract to reach the free agent market.

In his first season in Miami, Waiters averaged 15.8 points (the second highest mark of his career) and established the best personals in rebounds (3.3), assists (4.3) and percentage of triples (40 , 0).

Waiters was selected fourth in the first round of the college draw of 2012 by the Cavaliers, who in 2015 passed him to the Thunder after having faced openly with the star of the team, LeBron James.