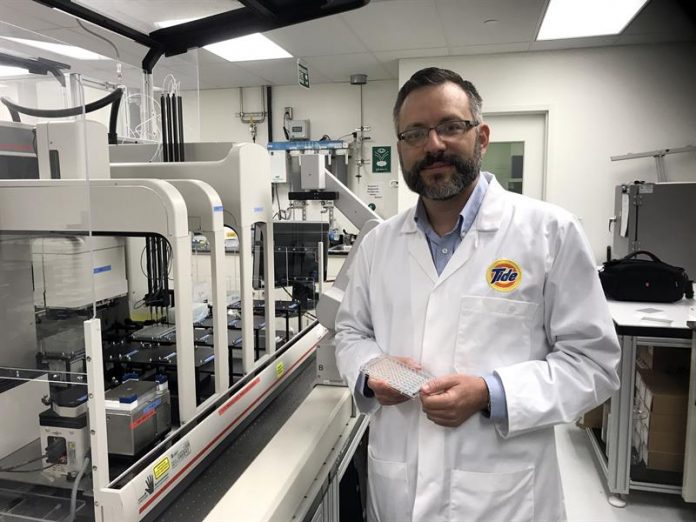 Procter & Gamble’s Center for Textile and Home Care Innovation in Cincinnati, one of the oldest commercial research facilities in the world, devotes time and efforts to the study of enzymes, key components in the development of sustainable products.

Among its almost 1,000 workers in Cincinatti, there are scientists dedicated to innovations related to the new market trends, many of them coming from other centers of innovation and development that the multinational has on the planet.

They are diverse the processes that its near 7,500 scientists and investigators realize in these centers of the whole world. One of them is the identification of enzymes, which the specialists believe will be vital players in the development of sustainable products and respectful with the environment.

Fabrizio Meli, P & G’s Manager in Research and Development of Detergents for Clothing, as the multinational company founded in 1837 by William Procter and James Gamble, explains that for example in the case of detergents the sustainable route is to continue developing enzymes, Which are found in the cells of living organisms and allow for sustainable and biodegradable production processes that minimize the effects of climate change.

A type of enzyme that degrades proteins, proteases, is important for the realization of natural biological functions in humans.

Used in science have helped advance in areas ranging from medicine and alternative energy to washing clothes.

The most recent versions of Tide detergent, the best-selling detergent in the United States, contain these enzymes whose purpose is to accelerate certain biochemical reactions and allow the detergent to “work” equally in cold or hot water, thereby saving energy and money .

The scientist, who specializes in the initial phase of the production of new enzymes, explains that for the final product to reach the consumer, the process can take several years and requires the participation of 825 people, from biologists, chemists and engineers to Psychologists specialized in the consumer.

Part of that process is the analysis in downtown Cincinnati, supported by robotic technology, millions of enzyme possibilities in a lot of thousands of “microlinders” with tenths of milliliters of solution that work until you get the one with the best performance .

In the real plan this process “would take thousands of washing machines, one hundred Olympic pools of quantity of water”, says Meli.

To this work is added the unit of Analytical Sciences of the company where they study at a microscopic level the washing processes in the fabrics and the effects of the enzymes.

Amanda Pessler, who works as a Microscopy Scientist and Imaging Laboratory at Procter & Gamble’s Home and Fabric Care Analytical Unit, said the company has about 4,500 laboratory equipment for the Science Unit Analytical, whose value amounts to approximately 100 million dollars.

Innovation is at the heart of the strategy of large international corporations, such as P & G, which has a presence in more than 70 countries and a range of more than 65 brands, which in fiscal year 2016 made 65.3 billion dollars in sales.

Specializing in cleaning products, hygiene and personal care, the largest manufacturer of consumer products on the planet began its journey with the marketing of candles and soaps and in its first 20 years of existence had already achieved its first million dollars.

According to Efe Greg McCoy, one of the curators of P & G’s Historical Archives, Tide’s appearance on the market in 1946 was a transformation for the corporation, which invested a year’s total profits in new factories and in implanting New production processes.

Three years later, in 1949, the detergent was already distributed nationwide and then, in 1968, the introduction of enzymes in Tide technology positioned the brand as a market leader.

“For the consumer, it is confidence of results in the washing and the way we have achieved that is having the best technologies,” Meli said.