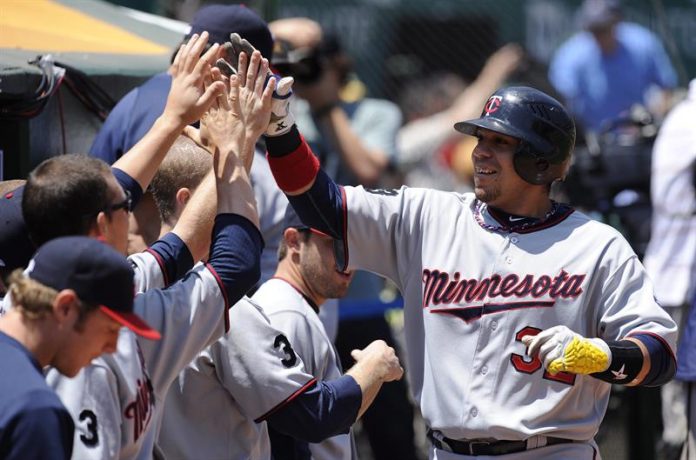 The Latin American drummer returned to have a leading role in the Major League game, and this time was represented by Puerto Rican catcher René Rivera, who hit a pair of home runs, and ended up as the most outstanding player in that facet of the game.

The starting pitcher of the Dominican starter Ervin Santana shone as he led the Minnesota Twins to the lead of his division, and remains second in the American League triumph category.

Less than 24 hours after Mexican closer Roberto Osuna said he was out of action indefinitely, he climbed the mound and struck out three rival batters.

While the Dominican starter Francisco Liriano got his 100th victory for life.

Rivera hit a pair of homers in the New York Mets’ 8-2 victory over the San Francisco Giants, allowing the big apple team to get swept up against the Californian, who is going through one of the worst moments of his story.

The Puerto Rican, who has reached the five homers since the season began, started his attack on second against starter Matt Moore with one runner and two outs.

In the fourth episode he returned to face Moore and again threw him out, solitary, and hit 2 of 5, finished with three RBIs and two TDs and put his .268 average with the tolete.

Montero made 104 shipments, 61 perfect against 22 opponents and left at 5.63 his effectiveness, being one of the positive notes that have had the Mets in the last weeks.

Santana pitched six innings and Puerto Rico ranger Eddie Rosario homered in the Twins’ 4-0 win over the Cleveland Indians.
The victory, with which the Twins “swept” the Indians, puts the Minnesota novena again as a leader in the Central Division of the Young Circuit.

The Dominican starter is second in the American League wins section, behind the Kansas City Royals, Jason Sanchez, who already has 11 under his belt.

Rosario (10) connected in the fourth episode, alone, against starter Josh Tomlin, with no outs in the inning.

Less than 24 hours after Osuna said he had anxiety problems and was out of the competition, he climbed the mound and struck out three batters in the Azulejos’ 8-2 victory over the Royals.

Osuna stated on Saturday that he was going through anxiety problems so he would be out of activity indefinitely.

But on Sunday the team leaders gave him all confidence and came out on the mound in the ninth, took the last three outs, retired three hitters via the punch, and allowed an unstoppable.

The Dominican faced 24 enemies with 93 shipments, 57 of strike and left in 5.46 its effectiveness.

His compatriot and teammate, ranger Jose Bautista (13) connected in the fifth episode against starter Jason Hammel, with a running runner.

For the Royals the Dominican ranger Jose Bonifacio (11) struck in the first against Liriano, solitary bambinazo, with an out on the account of the left-handed pitcher.

Another Dominican starter, Edinson Volquez, won with the Miami Marlins, who defeated the Chicago Cubs, the current World Series champions 4-2.

First baseman Yuli Gurriel homered in the Houston Astros’ 8-2 victory over the Seattle Mariners and kept the Texan team the best record in the Major Leagues.

Gurriel (8) threw the ball out of the park in the fourth episode with a runner against his compatriot starter Ariel Miranda, with two outs in the count.

Hernandez (8) took the ball out of the park in the third offense by starter Tyler Anderson, with a runner ahead.

Veteran third baseman Adrián Beltré made a comeback, the first of three to get the Texas Rangers, who beat the Yankees 7-6 in New York. Feltre (3) blew the bat in the first, with a runner against the opener Dominican Republic’s Michael Pineda, who had one out in his account.

The Dominican hit 1 of 4, drove in two runs and scored one, and left .284 his batting average. The Yankees had second baseman Ronald Torreyes (2) The ball out of the park against the Dominican relay Jose Leclerc, in the seventh, without runners in circulation.