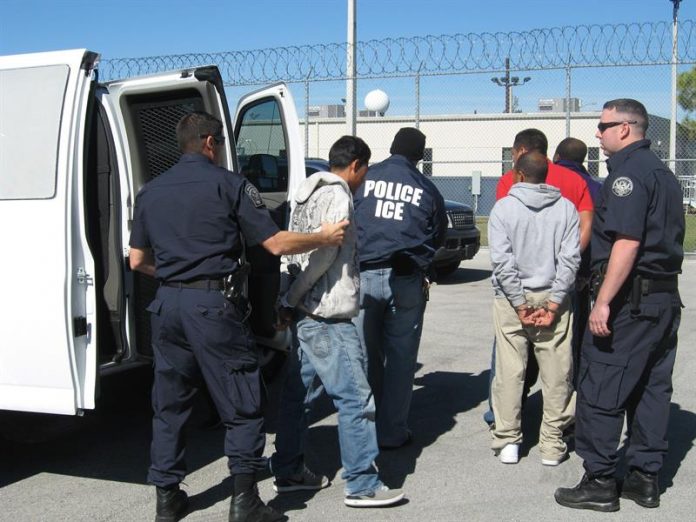 Leaflets attributed to immigration authorities and distributed in Washington call on US citizens to report their undocumented neighbors to the Immigration and Customs Enforcement (ICE).

According to an ICE spokesman, the leaflets, bearing the seal of that institution, have not been previously examined by the immigration authorities and are false.

“Circulars on enforcement of immigration laws that have appeared in Washington have not been distributed or authorized by the Immigration and Customs Enforcement Service,” one of ICE spokeswoman Carissa Cutrell told Efe.

“These notices are dangerous and irresponsible, just as with other fake ads about immigration controls. Anyone who creates panic or fear in law enforcement is hurting the community, endangering public safety and the very people who Says it supports and represents, “he added.

That way, the people who made the leaflets could have used the ICE stamp to legitimize their documents, which appeared for example this morning at a bus stop in southwest Washington, a poor area predominantly inhabited by African Americans.

The circular is addressed to the inhabitants of Washington, which is a “sanctuary city,” one of about 200 local US entities that refuse to inform the federal government of the immigration status of individuals they detain to prevent Be deported.

“If you see something, say something,” says the text, which includes a phone number that neighbors can call to report people living in the United States irregularly.

“If you want to report an illegal immigrant, please call the Immigration and Customs Enforcement (ICE). You will need names and locations (either place of work or residence) and any other information you may provide,” the poster says, Also spread on social networks.

In response, Washington’s mayor, Democrat Muriel Bowser, said on Twitter that the circulars “are not real” and said local police are pulling out posters on the walls and bus stops.

“It’s worth remembering that we respect all Washington residents regardless of their immigration status. Washington is still a sanctuary city,” she said on Twitter.

Similar leaflets have been distributed in recent weeks in Chicago’s southern and western neighborhoods, such as Englewood and Roseland, mostly populated by African-Americans.

According to the Fox network, the Chicago pamphlets bear the ICE seal and urge members of the African American community to telephone a number to denounce undocumented immigrants and offer a reward of between $ 3,000 and $ 10,000 for each Illegal reported “.

These leaflets have provoked a strong reaction among groups defending the immigrant community, such as CASA, whose members demonstrated today in front of the White House.

“We continue to fight for people caught up in these unjust and cruel migratory policies that make no sense and are unnecessarily tearing our families,” CASA chief executive Gustavo Torres said in a statement.