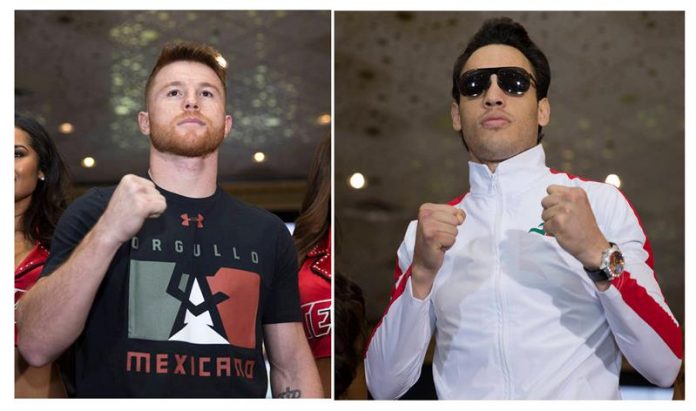 Everything is ready already in Las Vegas for another more stellar fight between two Mexican boxers with Saúl “Canelo” Álvarez and Julio César Chávez Jr. of protagonists in a duel that occurs within the category of the supermedian pesos, but without any world title in Game.

The above means that it is a fight mounted solely and exclusively for box office, with two boxers who guided by their promoters have left aside the true sporting interest to take another opportunity to get a major bag.

Although they run their risks with the final result that can occur next Saturday on the quadrilateral installed in the T-Mobile Arena, Las Vegas.

The one that has to lose most, without a doubt, is Chavez Jr., who comes to the fight in full attempt to recover image and position within the elite of boxing world, but who is not the favorite in the fight.

Hence, it is the pugilist himself who admits with sincerity and realism that he finds himself before what can be his last great opportunity, and hence he understands the magnitude of the fight for him.

“It’s possibly the last big chance I have,” said the former midfield champion in each of the interviews he has offered since arriving in Las Vegas. “It’s the biggest fight of my career for the moment in which I present this opportunity and the repercussion that will have among the fans.”

The reality is that at age 31, the son of six-time world champion Julio Cesar Chavez understands that the future of his career depends on the level he can display in the duel of Mexican boxers.

His last great fight goes back to nothing less than 2012, when the Argentine Sergio Martinez snatched the middle scepter to him after having dodged it for a long time.

From that moment on, his subsequent vicissitudes have not been the best with a suspension for marijuana use, an arrest for driving while intoxicated and some fighting for which he was in poor condition or overweight.

He has a pair of victories in the three fights he has played since 2015, but without having quality rivals he has faced.

“I was younger, the inexperience was what made me not do the right things, now I have more experience, I learned from the mistakes made,” Chavez Jr. says.

Certainly, that confronting Alvarez opens the doors to him to redeem itself in diverse senses, by its reputation, the name of its legendary father, to beat to its Mexican rival more direct and to silence its detractors.

Chavez Jr. reiterates as something learned that the match will be between two Mexican boxers, which has been prepared for a long time and now will mark the future of each of them.

Knowing that is underneath the bets, Chavez Jr. wanted to make it very clear that none of that matters to him and on the contrary his great quality is that he fights much better when everything is more difficult.

Although there will not be a world title in play with Saturday’s fight, Chavez Jr. and Alvarez face the fight as a transcendental appointment at a patriotic level, but with clear antagonism.
Last month, Alvarez (48-1-1, 34 KO’s), 26, talked about a personal factor such as pride over anything.

About the enmity with the “Canelo”, Chavez Jr. argues that it has no “specific reason.”
“It may be a good point that I am the son of Julio Cesar Chavez, but no one chooses that. I will show that I am something more than the son of Julio Cesar Chavez,” an affirmation that he repeated before each of his previous fights and Regardless of what he can get in the fight, his record and boxing qualities have nothing to do with that of his parent.

Saturday’s fight was settled at a weight of 164.5 pounds (super middleweight), a factor that in Chavez Jr.’s view leaves vulnerable to Alvarez, who has been upgraded from the superwelter.

While it has touched to him to lose of division after disputing recent combats like light-heavy (175 pounds) and to cost to him to reach the limit of the super-average category (168).
In the case of Alvarez, it is the highest weight in his entire career, in which he has fought lately as superwelter (maximum of 154 pounds) and medium (160).

Chavez Jr. insists he has many factors in his favor, but when it comes time for the fight the outcome will only depend on him to do the best boxing of his career, otherwise his name will immediately leave the list of the world’s elite.

The fighter is aware of this reality, as is his father, who admits that his son is facing a very difficult, but not impossible, mission.

An expression in boxing that is the prelude to the admission that the rival is superior, that has the elements to obtain the victory, but that only at the end of the combat will be known to the true winner.