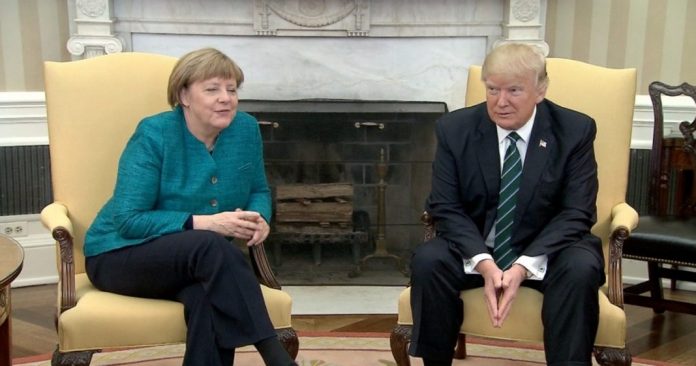 The president greeted the chancellor with one of his signature handshakes after her motorcade pulled up in front of the West Wing.

But when they posed for photographers in the Oval Office after a meeting, Trump appeared to ignore Merkel’s suggestion that they shake hands in front of the cameras.

The seemingly awkward moment was caught on video and shows Merkel turning toward Trump and asking, “Do you want to have a handshake?” Trump did not respond and continued looking forward. It’s unclear whether he heard the chancellor.

Trump later opened a joint press conference by criticizing Merkel’s open-door refugee policy, saying, “Immigration is a privilege, not a right, and the safety of our citizens must always come first.”

Trump also expressed his support for NATO but called on Merkel and other countries in the agreement “to pay their fair share for the cost of defense.”

For her part, Merkel took a more veiled swipe at Trump and his repeated criticisms of her on the 2016 campaign trail. “It’s much, much better to talk to one another and not about one another,” she said.

Also during the press conference, Trump hinted at his belief that former President Barack Obama wiretapped his phones at Trump Tower during the 2016 campaign.

“As far as wiretapping, I guess, by this past administration, at least we have something in common perhaps,” Trump told Merkel. The chancellor did not respond but gave Trump a puzzled look.

Trump appeared to be referencing 2013 reports that Obama had approved tapping Merkel’s phone calls in 2010. Merkel was angered by the reports at the time but the two leaders went on to develop a strong bond.

Merkel’s visit, her first to the U.S. in more than two years, came after months of mutual criticism between the two leaders. Trump has claimed that Merkel is “ruining” Germany by letting in too many refugees, and he openly protested when she was named TIME’s “Person of the Year” in 2015 instead of him.

Merkel, meanwhile, has been the leading voice in the European opposition to Trump’s travel ban, and has also taken issue with Trump’s criticism of NATO and other multi-national agreements.

Speaking to a pool of reporters after the meeting, both leaders said their talks went well. “Very good,” Trump said.

Asked if they discussed NATO, the president replied simply, “We talked about lots of things.”

The day is not over yet for Merkel and Trump. White House Press Secretary Sean Spicer said Monday that the president and the chancellor “have a series of meetings, and then will host a round table focusing on the importance of vocational training with both American and German business leaders.”

Toronto FC will be the team to beat; Villa, the star; Boat the great signing