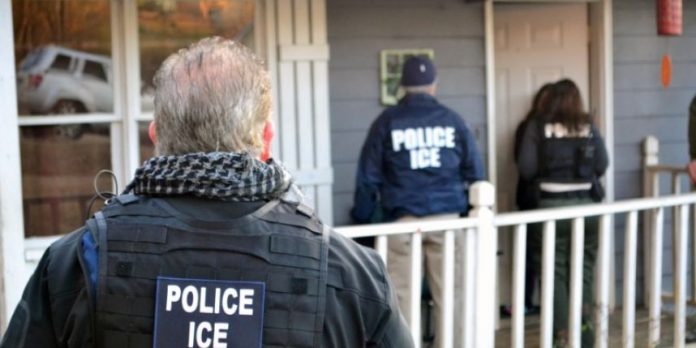 By Dan Levine and Kristina Cooke |

SAN FRANCISCO (Reuters) – U.S. immigration authorities have detained a 23-year-old Mexican man who was brought to the United States illegally as a child and given a work permit during the Obama administration, according to a lawsuit challenging the detention in Seattle federal court.

The man’s lawyers say this could be the first time under U.S. President Donald Trump that a person covered by the Deferred Action for Childhood Arrivals, or DACA, has been taken into immigration custody. The program was established in 2012 by Democratic President Barack Obama to allow those brought to the country while young to attend school and work.

Ethan Dettmer, a partner in the law firm Gibson Dunn & Crutcher and one of the lawyers representing the man, Daniel Ramirez Medina, said he is not aware of any other DACA recipient who has been arrested.

“We are hoping this detention was a mistake,” he added.

Ramirez was a “self-admitted gang member,” said Rose Richeson, a spokeswoman for U.S. Immigration and Customs Enforcement (ICE), in a statement.

“ICE officers took Mr Ramirez into custody based on his admitted gang affiliation and risk to public safety.”

Richeson declined to elaborate further on how ICE established the man was a member of a gang.

Dettmer said Ramirez “unequivocally denies” being in a gang.

Ramirez, who has no criminal record according to court papers filed in his case, was taken into custody last week at his father’s home in Seattle by ICE officers.

The White House did not immediately respond to a request for comment.

In an interview with ABC News last month, Trump said his administration was devising a policy on how to deal with people covered by DACA, without indicating any concrete plans.

“They are here illegally. They shouldn’t be very worried. I do have a big heart. We’re going to take care of everybody. We’re going to have a very strong border,” Trump said at the time.

According to the lawsuit, which was filed by Harvard Law School Professor Laurence Tribe and other prominent attorneys, officers went to the home to arrest the man’s father. Court documents do not make clear why the father was taken into custody.

Ramirez, now detained in Tacoma, Washington, was granted temporary permission to live and work in the United States under DACA in about 2014, according to the lawsuit, and his status was renewed in 2016. Reuters viewed a document attached to the lawsuit that appeared to confirm his DACA approval.

The program protects from deportation 750,000 people who were brought to the United States illegally as children, sometimes called “dreamers.”

Trump, a Republican who took office on Jan. 20, has promised a crackdown on the estimated 11 million illegal immigrants in the United States, most of whom come from Mexico and other Latin American countries.

Although the reasons for Ramirez’s arrest are in dispute, a move against DACA recipients would represent a significant broadening of immigration enforcement under Trump.

Reuters could not independently confirm whether other DACA recipients have been detained since Trump took office.

Ramirez filed a challenge to his detention in Seattle federal court on Monday, arguing that the government violated his constitutional rights because he had work authorization under the DACA program, his lawsuit said.

Another of Ramirez’s lawyers, Mark Rosenbaum of the legal advocacy group Public Counsel, characterized the DACA program as a promise from the federal government’s executive branch that DACA recipients would not be targeted for deportation and said he hoped that promise would not be broken.

Emily Langley, a spokeswoman for the U.S. attorney’s office in Seattle, said the Justice Department is still reviewing the case.

Under 2014 guidance from the Obama administration, someone would be a deportation priority for gang activity only if they had been convicted of an offence in connection with the gang, not for gang affiliation alone, although there was room for discretion on the part of immigration officials. Reuters could not determine whether gang members who had not committed crimes were deported during Obama’s tenure.

But immigrant advocacy groups and Democrats have expressed concern that the Trump administration will escalate immigration enforcement efforts in line with the president’s tough stance toward illegal immigrants.

Ramirez in his lawsuit is seeking immediate release and an injunction forbidding the government from arresting him again. A hearing in the case has been scheduled for Friday.

According to the lawsuit, Ramirez was asleep at his father’s home last Friday morning when ICE agents arrived and arrested the father. When they entered, they asked Ramirez if he was in the country legally, and Ramirez said he had a work permit, the lawsuit stated.

ICE agents took Ramirez to a processing center in Seattle and he again disclosed his DACA work permit, the lawsuit stated.

Ramirez was fingerprinted, booked and taken to a detention center in Tacoma where he remained on Tuesday, said Rosenbaum.