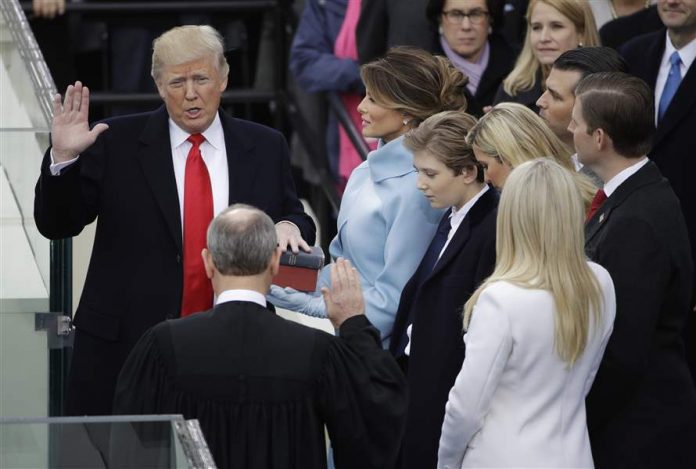 Donald Trump took the oath of office to become the 45th President of the United States on Friday, in an official swearing-in ceremony on the Capitol steps.

Trump’s family, as well as Vice President Mike Pence and his family, looked on as Trump swore the oath of office, continuing a tradition that dates back to former President George Washington’s inauguration in 1789.

After taking the oath, Trump hugged and kissed his family members and shook hands with former President Barack Obama and former Vice President Joe Biden. He and his wife, First Lady Melania Trump, turned and waved to the crowd and Trump pumped his fist in the air.

At the moment Trump was sworn in, protestors at one of the checkpoints on the Mall let loose with boos, others screamed, the clouds opened and rain sent ceremony attendees grabbing for their plastic ponchos.

Trump chose two Bibles for his swearing-in ceremony: one his mother gave him in 1955 when he graduated from Presbyterian Sunday school, and the one used by President Abraham Lincoln at his inauguration, according to The Washington Post.

Tom Barrack, Trump’s longtime friend and the chair of his presidential inaugural committee, explained the selections in a statement, saying, “In his first inaugural address, President Lincoln appealed to the ‘better angels of our nature.’ As he takes the same oath of office 156 years later, President-elect Trump is humbled to place his hand on Bibles that hold special meaning both to his family and to our country.”

The last and only other president since Lincoln to use the Lincoln Bible was President Barack Obama in both his 2009 and 2013 inaugurations, according to the Post.

Just before Trump took the oath of office, Pence was sworn in as vice president by Supreme Court Associate Justice Clarence Thomas.

After Trump’s swearing-in, he will give his inaugural address before attending an inaugural luncheon at the Capitol and later traveling on to the White House.

Trump begins his time in office as the least popular president in at least 40 years, according to a recently released Washington Post-ABC News poll that found that just 40 percent of Americans have a favorable impression of the Republican. That disapproval has seeped into the Capitol, with more than 50 members of Congress — most notably civil rights icon Rep. John Lewis — boycotting Trump’s inauguration and the accompanying events.

Asked about the boycott during a recent interview on Fox & Friends, Trump claimed he didn’t care. “That’s okay, because we need seats so badly,” he said. “I hope they give me their tickets.”

In addition to the boycott, multiple protests are planned for Trump’s inaugural weekend, with the largest expected to be the Women’s March on Washington on Saturday.