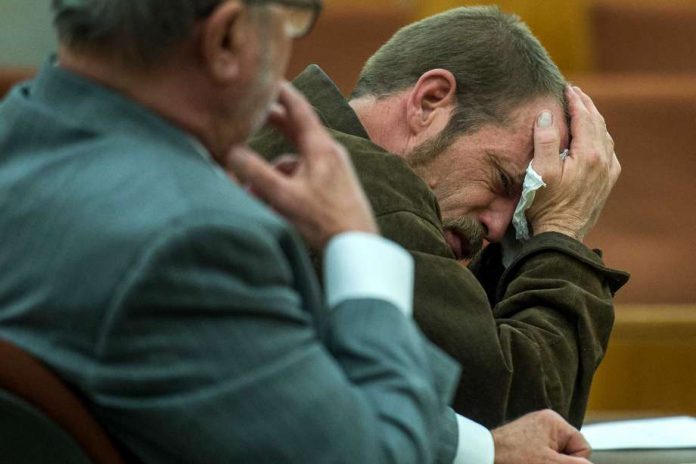 PROVO, Utah.— A Utah repossession agent accused of chasing a woman whose car he was trying to take back and forcing her off the road, leading to a deadly crash, received a surprise sentence after a judge deviated from a plea deal that called for no prison time.

Kenneth Drew, 50, had pleaded guilty to manslaughter in an agreement with prosecutors, who recommended a year in jail and probation, The Daily Herald newspaper in Provo reported (http://bit.ly/2igbpfl ).

Instead, Judge Robert Lunnen on Tuesday ordered Drew to serve one to 15 years in prison in the death last year of Ashleigh Best, 35.

“There was reckless disregard for another, and that recklessness caused the death of another,” Lunnen said.

Drew was visibly upset, putting his head on a lectern and covering his eyes and mouth with his hand. He expressed remorse.

“This is an unfortunate accident,” he said. “I apologize to the family. I know they probably won’t accept it, but I do.”

“I don’t think what was done was on purpose. But I do believe we should all be accountable for our actions,” Best said.

The deadly crash came after Drew went to the Best home late at night in May 2016 to repossess a car, authorities said. The family had fallen behind on title loan payments.

Drew argued with Brennen Best but agreed to leave the SUV to allow the couple more time to make a payment and return with proof, according to charging documents.

But Brennen Best also had told his wife to drive away, and when Drew saw her leave, he got angry and sped after her in his tow truck, prosecutors said. A neighbor’s security camera shows Drew trying to force Ashleigh Best against a curb as both cars accelerated, charging documents say.

Later, Drew drove alongside the SUV, grinding his rear right tire into Best’s door, prosecutors say. Going faster than 50 mph, Best jumped a curb and smashed into a tree. The mother of two died shortly afterward.

Drew told investigators he was following Best to keep an eye on the SUV, documents say.

Investigators said evidence, including pictures and GPS data from the tow truck, show Drew’s story did not match what happened.