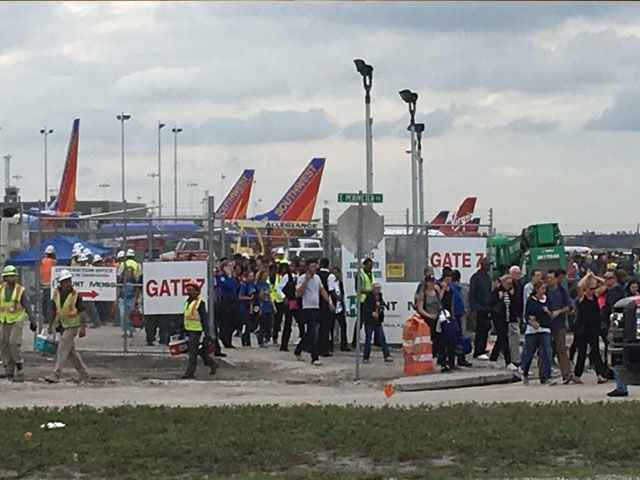 The shooter was in custody — unharmed and under interrogation — the Broward County Sheriff’s office said, but the situation remained “fluid and active.” Multiple law enforcement sources identified the suspect as New Jersey -born Esteban Santiago, 26, and said he had a military ID on him at the time of his capture.

All flights were grounded and additional areas of the airport were being evacuated and cleared. The motive for the attack, which started shortly before 1 p.m. was not known, according to law enforcement officials.

Florida Gov. Rick Scott held a news conference with Broward County Sheriff Scott Israel shortly after 5:15 p.m. ET. He reconfirmed the death toll of five people and said he learned about the incident earlier while he was in Fort Myers.

The governor said he reached out to President-elect Donald Trump to update him and Vice President-elect Mike Pence as the situation unfolded. Gov. Scott said he and President Barack Obama have not reached to each other.

In an earlier news conference, law enforcement officials said they did not fire any shots during the gunman’s capture. They also confirmed — despite unconfirmed reports suggesting otherwise — that no additional shots were fired at the airport at any time after the attack.

SWAT teams and law enforcement officials will work to clear every area of the airport before reopening, they said. As a precaution, the Broward Sheriff’s Office bomb squad detonated a suspicious package at the airport. That package was later found to be no threat.

The airport tweeted that the shooting took place at the Terminal 2 baggage claim area in the lower level, adding that the airport would be closed for an extended period of time.

Shortly after the shooting, the Transportation Security Administration warned people at the airport to shelter in place and described it as an active shooter situation.

In a statement, Delta CEO Ed Bastian extended his condolences to the people of Fort Lauderdale and Broward County. The airline also gave details on how it will proceed with the investigation.

Law enforcement officials had previously told NBC News they believed the shooter had arrived on a flight from Canada, picked up his firearm at baggage claim and began firing. However, Canada’s largest airline, Air Canada, confirmed via Twitter that it had no record of any passenger by the gunman’s name — nor checked guns — on any of its flights to Fort Lauderdale.

Earlier, hundreds of passengers and airport workers could be seen gathering and evacuating via the tarmac.

Both the Los Angeles and the Miami international airports said they were deploying additional resources in light of the attack.

American Airlines (AAL) said in a news release it was canceling all of its flights into the Fort Lauderdale Airport on Friday. The airline confirmed two of its flights landed safely at the airport and were being held away from the terminal. Two other flights were diverted to other airports.

The airport has four terminals and serves more than 73,000 travelers every day. It ranks 21st in the U.S. in total passenger traffic, with more than 650 commercial flights a day.

The FBI told CNBC it was aware of the situation and was in contact with local authorities, but no further information was available.