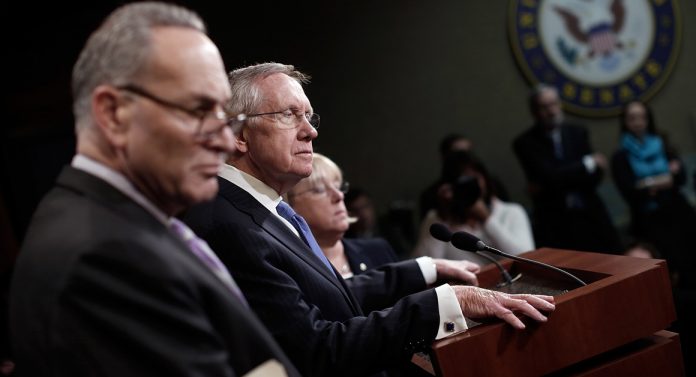 Chris Riotta |
President-elect Donald Trump is still weeks away from officially becoming the next president of the United States, but Democratic senators are already hard at work planning on how they can stop his administration at every turn. Democratic leaders, including incoming Senate Minority Leader Charles Schumer, are targeting at least eight of Trump’s most controversial White House Cabinet nominations, vowing to stray from Senate tradition and delay confirmation sessions as far into the New Year as March.

Specifically, Democrats are eyeing Trump’s pick for secretary of state, Exxon CEO Rex Tillerson, who does not have any political experience yet holds an “Order of Friendship” from Russia awarded by President Vladimir Putin. Senators are also expected to sharply oppose education secretary pick Betsy DeVos, who also does not have any political or educational experience, as well as attorney general pick Sen. Jeff Sessions, who couldn’t become a federal judge in 1986 after the Senate Judiciary Committee deemed him too racist to serve.

Meanwhile, President Barack Obama is meeting with Congressional Democrats Wednesday to discuss future strategies in protecting his signature domestic policy, and a large part of what could prove to be his eventual legacy, Obamacare. The fight to strip millions of Americans of health care access provided under the Obama administration’s landmark legislation could come down to a filibuster, essentially the only thing Democrats have in their arsenal to prevent the potential repeal efforts of the incoming Trump administration.

The battle for Democrats to preserve what little power they have left in the House and Senate comes as a newly elected Congress begins its work at noon Tuesday, kicking off with its re-election of Republican Rep. Paul Ryan as House speaker. Most of the GOP’s agenda will likely be passed with ease this year as Republicans gained enough of a majority in both houses during the 2016 election season to even break from their own leaders. That’s what happened Monday night when Republicans decided in a closed-door meeting to gut the independent Office of Congressional Ethics, Congress’ independent watchdog.