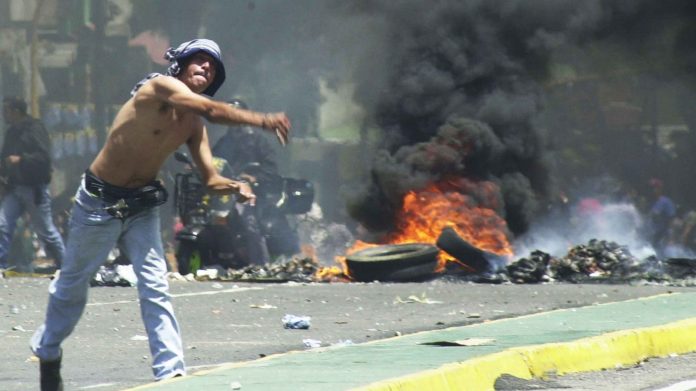 CARACAS (Reuters) – Roughly one person is being lynched in crisis-ridden Venezuela every three days as frustrated residents take revenge on suspected criminals, a monitoring group said on Wednesday.

The Venezuelan Observatory of Violence (OVV), which monitors crime, said mob killings have become a generalized phenomenon across the country, with 126 deaths reported in 2016 versus 20 last year.

“Due to being repeated victims of crime for more than a decade, and the feeling of not being protected, many people have decided to take justice into their own hands,” the OVV said in its latest annual report.

In the past, it said, lynchings of suspected murderers and rapists were relatively uncommon, but this year angry crowds have increasingly attacked petty criminals too, with police often turning a blind eye.

Venezuelans have long suffered alarming levels of violent crime, in part because of the widespread availability of guns, inadequate policing and a bribe-riddled justice system.

The OVV, a group of academics who compile data from police sources and the media, said Venezuela, with an estimated 28,479 homicides this year – or more than three killings per hour – was the world’s second most murderous nation after El Salvador

El Salvador had a rate of 116 murders per 100,000 inhabitants in 2016, according to the Institute of Legal Medicine in El Salvador.

President Nicolas Maduro’s socialist government rejects the OVV figures as inflated for political reasons. The last official murder rate it gave was 58 per 100,000 inhabitants for 2015.

Another researcher has also disagreed with the widely cited OVV data, criticizing its methodology and putting the 2015 figure at 70 murders per 100,000 people. (https://www.caracaschronicles.com/2016/07/01/our-dead/)

Whatever the right statistics, crime remains an all-pervasive worry for Venezuelans, especially in poor slums that are run by gangs and rife with guns. Numerous state security plans and disarmament drives have failed to curb the problem.

“Violence is killing the future of our country,” opposition leader Henrique Capriles said during a visit on Wednesday to rescue services in the Miranda state, which he governs.

“The government has spent 17 years without resolving the problem,” he added, referring to Maduro and his predecessor Hugo Chavez’s rule since 1999.