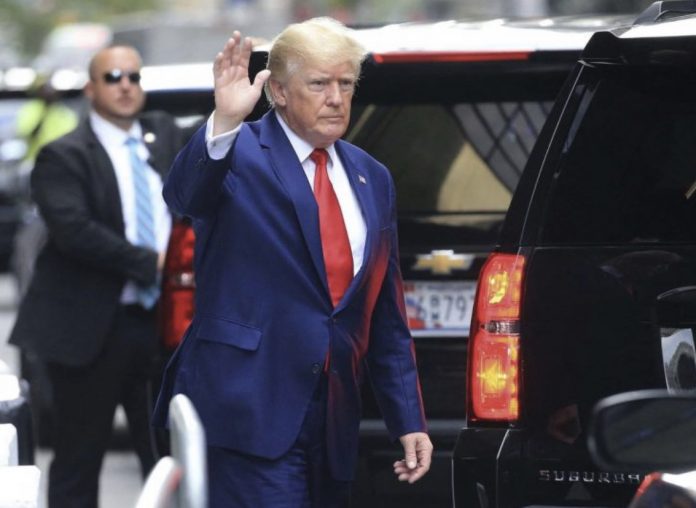 The dossier, released Tuesday night, provides the most detailed account yet of the FBI’s reasons for the Aug. 8 raid on Trump’s Mar-a-Lago residence, a record stemming from a review of the files that the former president had delivered to the authorities and that contained confidential information.

Prosecutors are apparently seeking to determine whether Trump or someone close to him committed a crime in order to prevent federal agents from recovering classified documents in the former president’s possession.

Before the raid, the FBI uncovered “multiple sources of evidence” that “classified documents remained at Mar-a-Lago,” the file says.
“We also found evidence that government records were likely concealed and deleted…and that there was likely an effort to obstruct the government’s investigation,” the filing adds.
The Justice Department describes in particular how when FBI agents first went to Mar-a-Lago in June to retrieve several files, a member of the Trump team provided them with “an affidavit” that they were the last ones there. In the residence.

But during the August search, federal police found about 30 boxes of documents so sensitive, ranging from “confidential to top secret,” that FBI and Justice Department attorneys had to seek “additional clearances” before they could see them. .

“All over the floor”

On the last page of the report, a striking photograph shows documents seized by federal police, marked “Top Secret,” spread out on a floral-patterned rug.

“It is appalling the way the FBI, during the Mar-a-Lago raid, randomly distributed documents all over the floor (perhaps pretending I did!) and then started taking pictures of them for the public to see. . I saw them,” Trump replied on his Truth Social platform on Wednesday, assuring that he had declassified them beforehand.
Trump, who flirts with the idea of ​​running for the White House again in 2024, has spent months denouncing a “witch hunt” against him by the administration of his successor, Democrat Joe Biden, and believes that justice ” should never have allowed a search” of his Florida mansion.

The Justice Department, for its part, indicates that it has explained the process that led to the raid to “correct the incomplete and inaccurate narrative presented” by Trump.

The department’s statement responds to a request last week by the former president for an independent expert to examine documents seized from his home by the FBI.

But according to the Department of Justice, naming this third party could block investigators’ access to the documents, and justice should not do so “because these (seized) documents do not belong” to Trump.

This instance “is not necessary and would seriously harm the interests of the State, even in terms of national security,” says the presentation.

The investigation and raid at Mar-a-Lago was triggered by the January delivery to the National Archives Administration, responsible for recording presidential activities for history, of 15 boxes of documents that Trump took with him when he left office. Oval. .
Some of these documents appeared with the acronym “HCS”, which in the US intelligence services designates information provided by “human sources”, informants and other undercover agents. The examination of these boxes convinced the FBI that more materials of this type would be in the possession of the former president.

Investigators suspect that Trump violated a US law on espionage that very strictly regulates the possession of confidential documents.

The billionaire is also under investigation for his attempts to overturn the results of the 2020 presidential election and his role in the January 6, 2021 riot of his supporters on Capitol Hill. He is not being prosecuted in any way. case.