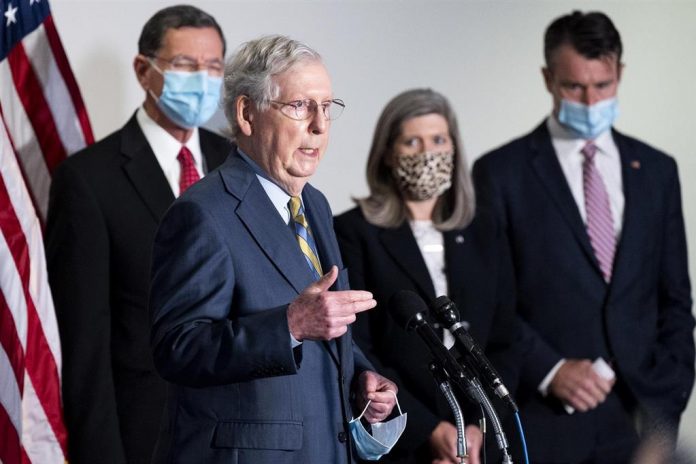 The leader of the Republican majority in the United States Senate, Mitch McConnell, has stopped this Tuesday an initiative launched by the Democrats to approve a bill with which the unemployment benefits, provided for in the economic aid plan against the coronavirus, from 600 to 2,000 dollars (490-1,630 euros).

The initiative, which had had the support of the House of Representatives on Monday, had been one of the requests of the President of the United States, Donald Trump, who came to describe those 600 euros as “ridiculously low” days after Republicans and Democrats will agree, after several months of negotiations, an economic aid plan against the pandemic valued at 908,000 million dollars (740,000 million euros).

The leader of the Democratic minority, Chuck Schumer, has pressed this Tuesday for a vote on this increase to be held as soon as possible, but McConnell has chosen to call the Senate to debate the issue throughout the week, along with two others. demands of President Trump.

It is about the repeal of article 230 of the defense bill, in which legal protection is granted to companies and Internet platforms in relation to the content published by their users, and the creation of a commission to investigate the alleged fraud in the presidential elections.

With this maneuver, McConnell is trying to link these three aspects in a single legislative package, thus allowing the Republicans to accede to the demands of President Trump regarding the repeal of section 230 and the electoral commission of inquiry, but perhaps not the increase in the subsidy, an issue on which there is no unanimous consensus within the party.

“Unless Republicans have a death wish, and it is also the right thing to do, they must approve the payments of $ 2,000 as soon as possible. 600 is not enough!” Trump wrote on Twitter when he heard this news.

Earlier, Schumer has already warned in this Tuesday’s session in the Senate that these claims have no chance of succeeding in the House of Representatives, with a Democratic majority, and has once again insisted that Republicans pressure McConnell to vote about that rise in the unemployment bonus.

“Senator McConnell knows how to make these $ 2,000 survivors checks a reality and he knows how to kill them, but will the Senate Republicans agree to this cynical tactic or will they push for a vote on his House approval?” Schumer asked.

WITHOUT CONSENSUS IN THE REPUBLICAN PARTY ON THE RISE OF AID
Although President Trump has been in favor of raising direct unemployment benefits, several Republican senators have not shown much for the work, at a time when the party may lose control of the chamber if it does not win the two seats in dispute in the second electoral round that takes place on January 5 in the state of Georgia.

They are precisely the candidates to occupy these seats, David Perdue and Kelly Loeffler, some of the few Republicans who have been in favor of this measure, which would mean another 464,000 million dollars (378,500 million euros) to the 908,000 million dollars expected initially.

“President Donald Trump is right, I support this push of $ 2,000 in direct aid to the American people,” Perdue wrote on his Twitter account on Tuesday.

However, there have been very few Republicans, only 44, who decided to support the measure this Monday in the House of Representatives, as detailed by the US media, while in the Senate there are few who have been in favor, among them the senator for Florida, Marc Rubio.

“I share the concern of many of my colleagues about the long-term effects of the additional spending, but we cannot ignore the fact that millions of working-class families across the country still urgently need help,” Rubio said.

However, it is the increasingly growing national debt dragged by the United States that has led some Republicans such as Pennsylvania Senator Pat Toomey to call this rise a “bad idea”, as he assures that “most of the checks are they are going to send people who have not had any loss of income “during the pandemic crisis.