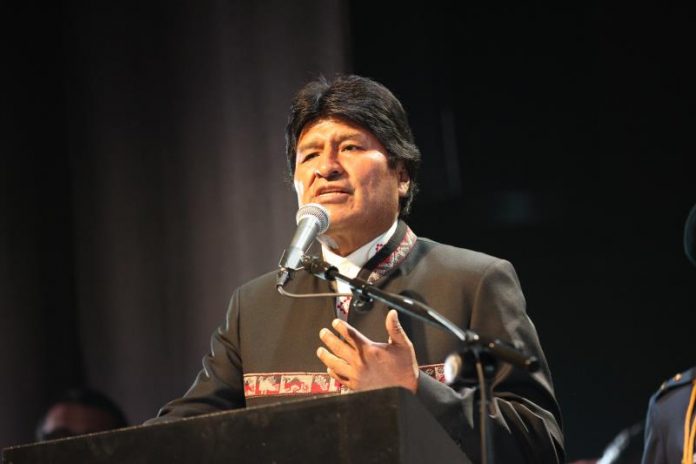 La Paz, .- The president of Bolivia, Evo Morales, denounced on Thursday that a proposal in the United States Senate on this year’s elections in Bolivia “aims to violate the sovereignty” of the South American country.

“The Senate resolution of #EEUU intends to violate the sovereignty of #Bolivia and violates the principle of non-interference and respect for the democratic will of the people, enshrined in the Charter of the @ONU,” the Bolivian leader wrote in his account On twitter.

Morales referred in several messages on the social network to a proposal by US senators that demands respect in Bolivia to the constitutional limit of mandates and to restore the independence of the electoral body, among other issues regarding the October elections in the country.

“The Bolivian people are free and dignified and reject any form of interference,” said the president, who is running for re-election as the candidate of the ruling Movement for Socialism (MAS).
The Bolivian head of state added that “the US has no moral to speak of respect for human rights – human rights – and now its Senate speaks of respect for democracy in Latin America.”

“If they are worried, we invite them to attend the elections in October, and the Bolivian people can teach them how to make decisions with dignity and sovereignty,” Morales said.

The Bolivian Legislative Assembly, with an official majority, approved Thursday a rejection of the proposal put forward in the US Senate.

The proposal of Senate Democrats Bob Menéndez and Dick Durbin and Republican Ted Cruz raises a statement by the US Senate in terms that require the Bolivian government respect for the constitutional limit of mandates, the independence of the electoral body and a referendum that denied Morales the re-election.

Evo Morales is the president with more time in power in the history of Bolivia, since 2006, and aspires to a fourth consecutive term until 2025, after agreeing the Constitutional Court of the country in 2017 that has the right to an indefinite re-election.

That same court has already authorized Morales for a third term, on the understanding that the former did not count because the country was consolidated in 2009 from the Republic to the Plurinational State.

The Bolivian opposition argues that the Constitution of the country should prevail, which limits the two terms followed, and a referendum that in 2016 denied Morales the possibility of being a candidate again. (EFE)