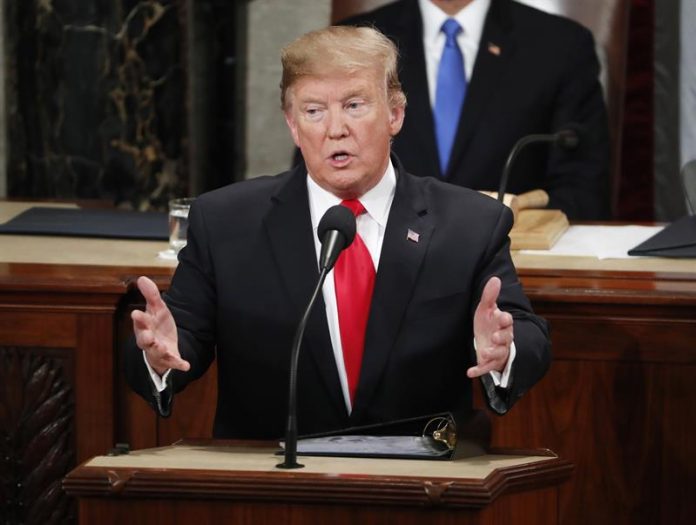 The president, Donald Trump, said today that he will build the wall on the border with Mexico, and indicated that his Administration has sent to Congress a “common sense” proposal to end the “crisis” in that area.

“In the past, most of the people in this room voted for a wall, but the right wall was never built, I will build it,” Trump said in his second speech on the State of the Union since his arrival in power. January 2017

The dispute in Congress over the resources for the border wall triggered the partial closure of the government administration, which lasted 35 days and forced the governor’s speech to be delayed for a week.

Trump said that while they are speaking, “large caravans” of immigrants are marching towards the country and warned that no topic illustrates better the division between the working class and the political class than “illegal immigration.”

As detailed, his proposal to the Congress includes humanitarian assistance, more agents of the law, strengthen mechanisms for drug detection and prevention of child trafficking.

But Trump again attacked the illegal immigrants and warned that “year after year countless Americans are killed by illegal criminal aliens.”

“Tolerance for illegal immigration is not compassionate, it is cruel,” he stressed, while calling the Salvadoran gang MS-13 “savage”, saying it operates in 20 states “and almost all of them arrive” in states. United through the southern border.

The country began to officially implement a policy of “zero tolerance” towards illegal immigration last April, when authorities began criminally prosecuting adults who arrived irregularly in the country, which led to the separation of about 3,000 children from their parents undocumented

Also, last December, the US announced that it would return to Mexico all migrants who accessed the common border irregularly, including asylum seekers, pending the resolution of their cases; a measure that has been described as “unilateral” by the Mexican authorities.

In recent months, several caravans have been organized for migrants from Central America who have left to the north in the direction of the US border. and Mexico, which has exacerbated Trump’s anti-immigration discourse.

Trump returns to lash out against illegal immigrants and gangs

The president, Donald Trump, returned today to attack illegal immigrants to warn that “year after year innumerable Americans are killed by criminal illegal aliens” and labeled as “wild” the Salvadoran gang MS-13.

“Tolerance for illegal immigration is not compassionate, it is cruel,” he warned in his second State of the Union address.