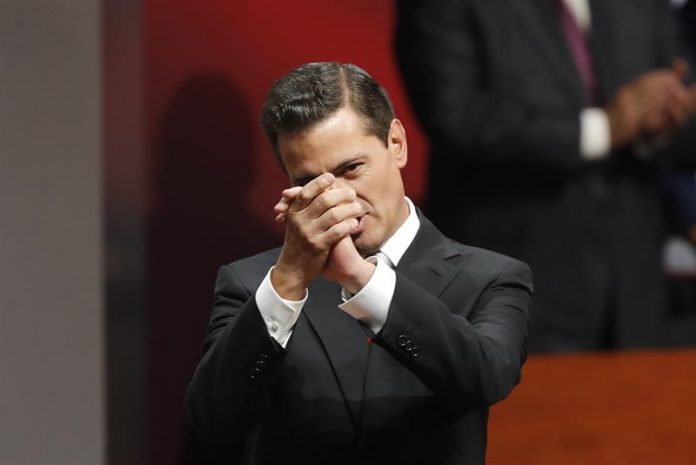 The president of Mexico, Enrique Peña Nieto, today vindicated his legacy by submitting his sixth and last government report, underlining political and economic stability, but hardly addressing the tragedy of corruption and violence that plagues the country.

“Today we are a better country than we were six years ago.To achieve it has been since the first day of this mandate my greatest commitment,” he said between applause, at the close of the event held at the National Palace, headquarters of the Executive.

Throughout about an hour and a half, the president has cracked what, in his view, are the main achievements of the Executive that heads since December 2012.

He boasted of his legacy, focusing especially on the structural reforms of the Pact for Mexico – an agreement with the main political parties in 2012 – such as education, telecommunications or energy, which opened the sector to private initiative after almost eight decades of state monopoly.

He also highlighted greater interference in foreign affairs and intense diplomacy, which allowed the country to reach an agreement with the United States derived from the complex negotiations to modernize the North American Free Trade Agreement (NAFTA).

When talking about social achievements, Peña Nieto highlighted the fight in the fight against poverty, highlighting that more than two million Mexicans came out of extreme poverty.

In a message almost identical to last year, he insisted that in the next decade extreme poverty could be eradicated if the path is followed.

All this, he continued, will allow “to transform Mexico” and forge a new nation “for the next generations”, indicated with certain triumphalism the head of Government, of the Institutional Revolutionary Party (PRI).

Encouraging reforms such as education, which expanded the control of teachers and their unions, even stood as someone capable of breaking molds, facing the system.

“I am aware that the change affected old privileges, and we were willing to assume this cost and assimilate the wear,” said the president, who will leave power on November 30 with very low levels of popularity.

In this way, the self-criticism shone almost by its total absence in the last report of Peña Nieto. Although some brief flashes of reflection let glimpse his speech.
“Recognize that not all subjects achieve the proposed objectives,” he said towards the end.

Especially in matters of security, in the first section of his message, he acknowledged that it was not possible to “recover peace and security” for all Mexicans.

The country is mired in a whirlwind of violence that, according to the most recent count of the National Institute of Statistics and Geography (Inegi), claimed 31,174 lives in 2017, the highest figure in two decades.

These omissions in matters as serious as violence also characterize the government’s own sixth report, a 738-page document in which, for example, the number of homicides last year or the number of murdered journalists is not given.

In today’s event, Peña Nieto also reached out to the future president of Mexico, the leftist Andrés Manuel López Obrador, who will take office in December.

“With republican spirit, I reiterate my congratulations to Andrés Manuel López Obrador, president-elect of Mexico,” said the president, who wished the leftist “the greatest success” and stressed that until the transfer of power will continue betting on dialogue .

At the end of his speech, Peña Nieto, surrounded by the political leadership of his party and important businessmen like Carlos Slim, had some tender words for his mother, wife and children, who could not contain the tears.

Moustakas and the Royals stop the Astros’ triumphal march