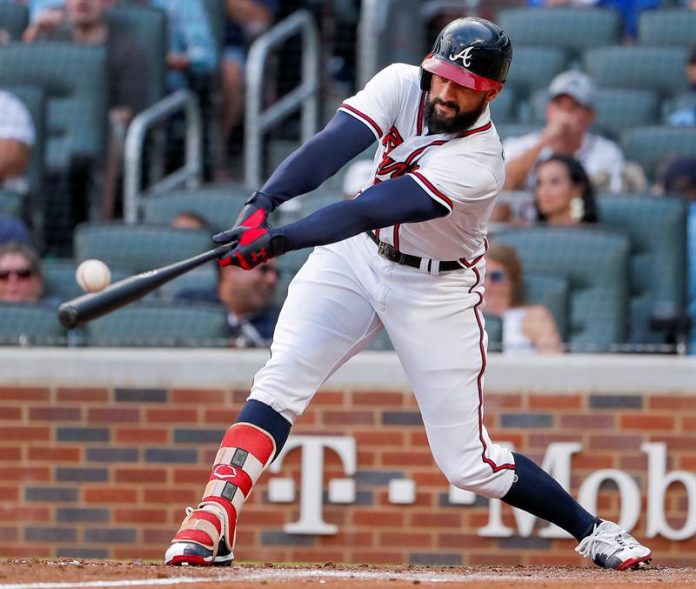 The resurgence of the Atlanta Braves had its best expression with the two triumphs they achieved in the doubleheader of the day of baseball of the National League and that consolidated them as new leaders of the East Division.

While the San Francisco Giants left the Los Angeles Dodgers lying in the field in the Californian duel and the Mets to the Yankees in the New York Interleague duel.

The figure of young Venezuelan baseball player Ronald Acuña Jr., only 20 years old, was enlarged by being the leader of the Braves offense that won the first game 9-1 and the second by 6-1 against the Miami Marlins.

In both games, which were played in Atlanta’s SunTrust Park, Acuña Jr. achieved a rare feat in baseball by connecting homers to start the two games.

The Venezuelan rookie hit a home run to the opposite field that landed in the Braves bullpen against the Marlins starter, his compatriot Pablo Lopez, of Miami, in the first game.

Acuña Jr. brought another fly to the seats between left and center field to start the second duel against Dominican starter Merandy Gonzalez, who was serving his first major league start.

It would be just the fourth player in the history of baseball to hit a pair of home runs to start the meetings of a double card.

Two others who had achieved it before were Rickey Henderson and Harry Hooper, both elected as members of the Major League Baseball Hall of Fame.

According to MLB statistics, they indicate that Brady Anderson of the Baltimore Orioles won the odd pair of homers during a doubleheader at home against the Chicago White Sox on August 21, 1999.

Prior to that, the achievement was Henderson of the Oakland Athletics, at home against the Cleveland Indians on July 5, 1993, and of Hooper while playing for the Boston Red Sox on May 20, 1913, during a pair of duels against the Washington Senators.

Acuña has 17 homers this season, four of them to start a game, which shows the offensive power that is locked in his bat.

Thanks to the two victories, the Braves took a lead in a game over Philadelphia Philadelphia, which had a rest day, in first place in the East Division (66-51).

Pop-up hitter Nick Hundley fired a two-run single in the ninth to give the Giants his first lead of the game, and San Francisco came from behind to beat home run 2-5 in the fourth straight loss to the Dodgers’ bullpen. .

On this occasion, the Dodgers squandered a masterful opening of star lefty Clayton Kershaw, who limited the Giants to a career on eight hits, all singles.

Hundley’s single with two outs advanced to San Francisco 3-2. Veteran outfielder Gorkys Hernandez drove in another run with a single and the Giants returned to the plate in a fielding error by Max Muncy.

All the races came before reliever Scott Alexander (2-1), the Dodgers’ last pitcher to get through problems with the loss of Curacao closer Kenley Jansen.

The triumph went to Ray Black (2-1), who worked a perfect eighth inning, while Will Smith threw the ninth for his ninth save in 11 chances.

Starter Jacob deGrom retired 12 batters through the punch and the Mets won 5-8 at home to his neighbors the American League, the Yankees, who lose more ground in their fight for the title of the East Division of Youth Circuit.
DeGrom was better on the mound than Dominican starter Luis Severino, who came out as a star for the Yankees.

His compatriots, Amed Rosario opened this duel of the “Subway” Series with a homer in right field, while Jose Bautista, Todd Frazier, Brandon Nimmo and Michael Conforto also sent the ball over the wall.

The team’s best show of power since June of 2017 lifted “Vamos Mets” chants throughout Yankee Stadium.

DeGrom (7-7), victim of little support of races in the season, threw six innings and two thirds, and came out with the best effectiveness of the majors with 1.81.

The right starter gave two clean runs and left the duel with a 7-3 advantage.
He shot Austin Romine with his 113th pitch and last pitch, and walked out amidst cheers from the majority of Mets fans who witnessed the game.

DeGrom won his first career victory in three starts in the Bronx, and improved to 2-4 in total against the Yankees.

Severino (15-6) came out much earlier. Instead of breaking a tie with Washington ace Max Scherzer, for being the first to reach 16 wins, the best record in the majors, he remained trapped in

Severino (15-6) came out much earlier. Instead of breaking a tie with Washington ace, Max Scherzer, for being the first to reach 16 wins, the best record in the majors, remained trapped in a routine that began before he pitched in the All-Star Game.

Paul DeJong ended the game with a solo homer in the ninth inning, and the St. Louis Cardinals defeated the Washington Nationals 7-6, who for the second consecutive game stayed on the field.

DeJong found a pitch from Koda Glover (0-1) in the beginning of the ninth and sent the ball to the other side of the fence, with a 3-1 score. One night earlier, Ryan Madson allowed David Bote a grand slam, for the Chicago Cubs to beat Washington 4-3, also in the ninth.
Rubén Mantilla