Just three days before 2018, thousands of New Yorkers and tourists from around the world wrote their wishes for the New Year in scraps of confetti that will be launched from the Times Square plaza during the New Year’s Eve celebration.

The “wall of desires” was installed on December 1 and has remained open until today, when all messages will be stored and become part of the rain of confetti that is released on New Year’s Eve during the welcome show to the new year, celebrated in the emblematic square since 1904.

According to the Times Square Alliance organization, in charge of the event and the preparations for the night of December 31, the confetti will be thrown after the traditional descent of the famous ball of 2,688 crystals – New Year’s Eve New York eve – as part of the culminating act of a party that lasts 6 hours.

Thus, the rain of desires in the form of confetti joins for the third consecutive year to this multitudinous celebration, characterized by various lighting and pyrotechnics shows and musical performances by artists such as Mariah Carey, Camila Cabello or Nick Jonas.

“Make your wish become one more part of this magical night by sharing it with the whole world,” say the organizers, who hope to shed more than 1,300 kilos of confetti at the ceremony, while encouraging visitors to come closer and read the wishes of others.

In this famous wall you can find emotional personal messages, inspirational phrases and good intentions in different languages, which shows that there are still many people who see in this type of symbolic rituals a way to attract good luck.

“I asked that my father finally get the heart transplant that he has been waiting for for some time,” a Colombian citizen who identified herself as Ana María, accompanied by her husband Enrique, told Efe that she asked her new business to do well.

Other wishes are lighter, like that of Dhwani, an Indian student who resides in New York and asked to “have a lot of fun” in the new year.

The Mexican Adriana would like to “be a better person” in 2018, and this is what she captured on the piece of paper, while her mother Lidia asked that all her children be “happy”.

Elizabeth and her husband, both of the state of Tennessee and carrying a baby in their arms, prayed that the New Year would give them a new son, while Tania, from Michigan, asked that “everyone be kinder to each other”.

One of the volunteers from the Times Square Alliance, Nancy, also expressed her wish: that her partner recover from a heart condition. 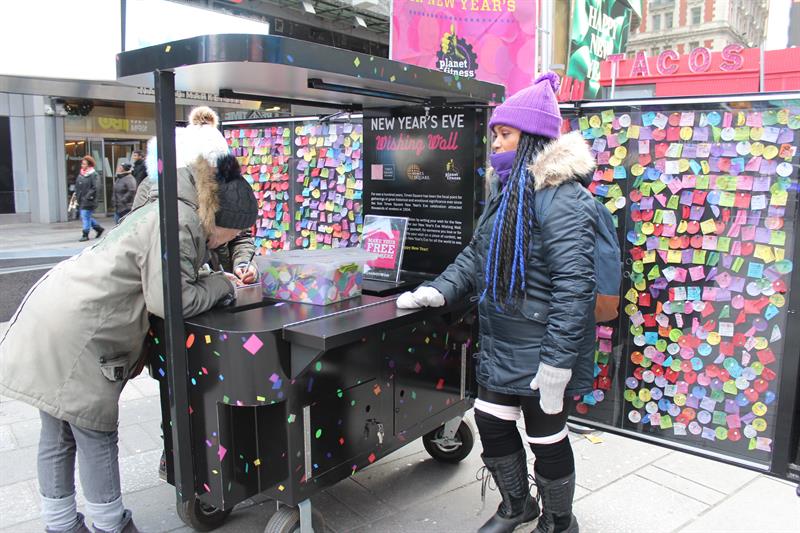 The volunteers of the Times Square Alliance take turns guarding the Wall of Desires, and in their case regrets having chosen the most icy week, although they believe that the experience is worthwhile for all the people they have met.

Nancy recalled a man who had visited them last year and wished to find his “half orange”, and a year later he returned accompanied by his new wife to thank the wall.

Many curious people come to read some of the messages that remain exposed, most of which ask for health and love, although more than one also yearns to win the “lottery”.

Those who could not make their requests in person had the possibility of sending them to a “virtual wall”, sharing their wishes on social networks with the hashtag #confettiwish, or through the website form timessquarenyc.org.

On the label of the Twitter network, Crystal Nelson, a neighbor from New Jersey, said that all she wanted in 2018 was “the removal of Donald Trump.”

Another Internet user, Lauren Christine, has it clearer with her three wishes: “Fall in love, lose weight and get a stable and well paid job”. (efeusa)

Tension and turnout soar in the United States on Election Day

On one day before the elections of next Tuesday, November 3, the United States electoral campaign has raised one more degree the tension between...

Christmas is a time to celebrate and celebrities do not hesitate to flood social networks with greeting cards or personal and family photos, although...

The US registers more than a million infections by COVID-19, the highest number in the world

The United States has registered more than a million cases of coronavirus this Monday, a record number of infections around the world marked by...

Pressing, counts the download Houston .- The inspirador encestadora of the escort James Harden returned to be protagonist in the day of dominical of...

The governor of Arizona, Doug Ducey, today signed a new law that authorizes the production of industrial hemp, fiber from the cannabis plant, used...