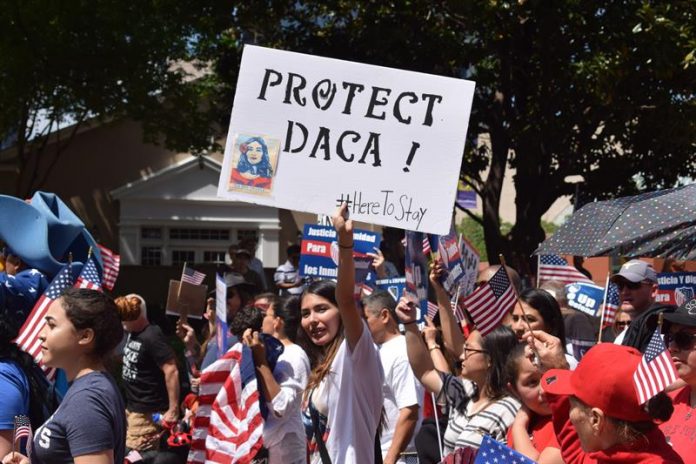 Beneficiaries of the Deferred Action (DACA) today pledged to “fight” to defend this amparo after learning that the government is considering suspending this executive measure approved by former President Barack Obama in 2012 to protect thousands of undocumented youth from deportation.

“The truth is that all we have is DACA and that’s why we have to defend it,” said Maria Asunción Bilbao, organizer for Florida of the group of “dreamers” United We Dream.

For these young people, the executive said, this executive measure is the only umbrella that protects them from the danger of massive deportations advocated by the administration of President Donald Trump after Congress has “failed” in recent years to pass a law that Them.

“They (legislators) always say that Congress has to act, but the reality is that they have failed and the only thing that has been achieved is this relief that protects more than 800,000 young people from being deported and gives them the opportunity to work,” he said. .

Therefore, they want to make clear that they will oppose any measures that put them in danger of expulsion and have put to work, with demonstrations such as today in front of the White House.

In Florida, youth groups flocked to the offices of Senator Marco Rubio and Congressman Mario Diaz Balart to urge these Republican lawmakers to “stand up for DACA.”

Their demand is to join the group of conservative representatives who this week asked in a letter to Trump to protect the beneficiaries of DACA, as maintaining this protection is “in the best interest of the nation.”

Juan Escalante, representative of America’s Voice, called for “pushing” in favor of an executive order that “not only benefits the country as such, but also the economy itself.”

“The program is worth having an educated workforce that is considered American, who are bilingual, who have grown up in this country, that is priceless,” added the activist, DACA beneficiary.

Lorella Praeli, director of Immigration Policies and campaigns of the American Civil Liberties Union (ACLU), supported the continuation of the program.
“We have 800,000 examples of why DACA strengthens the United States and why this program should continue,” Praeli said in a statement.

“DACA is successful, popular and constitutional and must remain in the books until Congress passes a clean legislative solution to address the status of dreamers,” said the ACLU representative.

Undocumented activists and youth promise that this argument will continue to be defended before congressional offices, the Capitol itself or the courts.
Whatever it takes to maintain an amparo that will keep them from returning to the shadows they lived in until Obama launched DACA in August 2012.

And as it is an executive measure, the “dreamers” know that their first firewall is Trump, which, according to Escalante, is the only one who will have to make this decision and is confident that he will show that “he has an understanding of Importance of DACA “.

But Trump is under pressure because of the threat of lawsuit filed by Texas prosecutors and nine other conservative states, who said they would file a lawsuit against the executive to end the program through the judicial system if the White House did not suspend it Of 5 of September.

The promoter of this lawsuit is Texan prosecutor Ken Paxton, a vocal opponent of DACA and who has asked Trump to fulfill his electoral promise and repeal Obama’s plan.