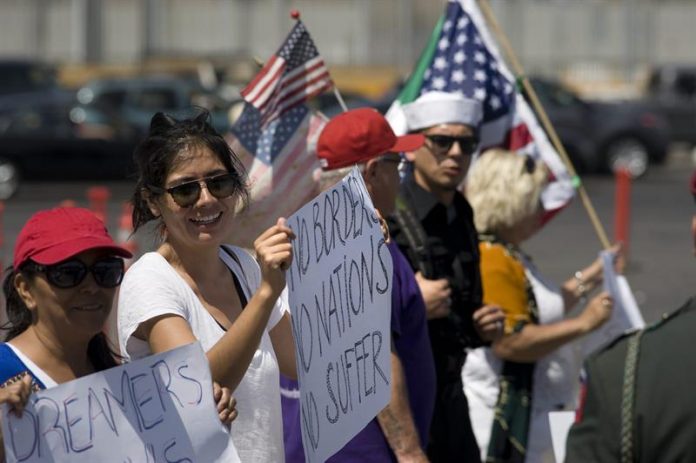 More than 15,000 foreigners will become US citizens. This Tuesday in Independence Day, a day that calls for reflection on the contribution of immigrants to the nation at a time when the anti-immigrant speech of the Government of Donald Trump is increasingly hard.

Since July 4, the United States has become home to millions of immigrants who came to the country in search of the “inalienable right to life, liberty and happiness” established by the nation’s founders in the Declaration of Independence. Independence.

In that proclamation, the signatories accused Britain of obstructing “naturalization laws of foreigners and refusing to approve other laws that encourage migration in the future.”

At present, Congress signs laws to prevent the arrival of immigrants to the country and from the White House rises the tone in its speech against the undocumented and is planned to build a wall in the border with Mexico.

On the eve of these celebrations, the president publicly last week endorsed bills passed by the House of Representatives to increase prison sentences for undocumented immigrants or to withhold federal funds from the “sanctuary cities” that protect them.

Since announcing his intention to run for the presidency in 2015, Trump made the immigration issue one of the cornerstones of his rhetorical rhetoric, which, according to activists, has contributed to the rise in racial hate crimes in the country.

According to Oscar Chacón, executive director of Alianza Americas, Trump’s “ultranationalism” on the issue of migration is worrisome because of its policies to deport millions of undocumented immigrants, prohibit the entry of refugees and Muslims, and erect walls.

July 4 is the day that recalls that the United States has been a nation of immigrants since its founding 241 years ago, making it a “patriotic duty to embrace love instead of hatred,” and find ways to build it together, “Said Efe.

“As we celebrate with our families, we must take a moment to reflect on the urgent need to respect differences as a fundamental principle for a healthy society,” he said.

According to Frank Sharry, executive director of the America’s Voice group, this “radicalization” of Trump is something “unprecedented in modern times.”
“He sees immigrants as criminals and a threat, and his administration treats them in a cruel and chaotic way,” he said in a statement.

The activist recalled that immigrants and refugees play an important role in the country’s history and daily life, because “they create companies, serve in our armed forces, put food on our table, build houses and skyscrapers, advance our technology and enrich Our arts and culture “.

For the mayor of New York City, Bill de Blasio, the anti-immigrant speech being heard in the country, and in the White House, should not prevent recognition of “the valuable contributions of immigrants to our nation.”

“It is the history of our country, an intrinsic part of our national character, of our greatness,” he said in a message addressed to four out of ten New Yorkers born outside the United States.

“Immigrants are a key element to the success of New York City,” he said.

New York, along with Los Angeles and Chicago, launched the “Cities for Citizenship” campaign in 2014, which now brings together 40 cities and collaborates with the naturalization of one million foreigners per year.

Currently, immigrants represent 13.5% of the country’s population, with some 32 million having legal status, and some 11 million undocumented immigrants.

According to the latest statistics, Mexico is no longer the majority origin of immigrants and there is an increasing flow of people coming from Asia, Africa and other Latin American countries.

“Everyone deserves to be treated with dignity, equanimity and respect, regardless of the color of their skin, the language they speak or the god they pray for,” Sharry said.