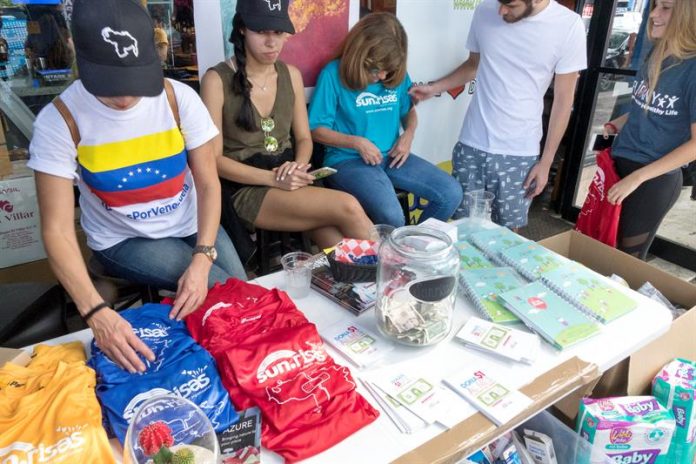 The Venezuelan foundation Sun.risas collected medicines, food, diapers, formula milk and other supplies, especially for children, in Small Havana, in Miami, which will be destined for the Latin American country.

“The idea is to unite our brothers from different countries to sensitize them to what is happening in Venezuela,” Nicole Galli, one of the founders of Sun.risas, told Efe.

He pointed out that all the Cubans, Puerto Ricans, Colombians, Hondurans and people of other nationalities who have gone to the popular Calle Ocho in Little Havana to make their donations have expressed words of encouragement to the Venezuelans and have shown their solidarity before The crisis that the country lives.

“Everyone, different cultures, know the situation in Venezuela, is something that should not be explained,” he added.

Galli said that Venezuela needs “everything”, but especially, supplies for babies, which will then be distributed by organizations with those working in that country, “to avoid diversions.”

“Many babies are dying of malnutrition. Every day, forty babies die in hospitals in Venezuela,” he said.

He explained that the foundation sends an average of “one hundred large boxes” of food and supplies each week, without specifying their weight in tons.

Sun.risas, created three years ago, works especially with children volunteers, who help to raise money, organize the collected and pack it, besides selling cakes that they prepare themselves.

“The idea is to raise awareness among the most privileged children of what is happening in the world, and right now in Venezuela,” said Claudia de Cecchi, another of the volunteers.

Cecchi also said that cash collected is used for medical treatment for children with serious illness or infection.

To this end, they have also created a campaign whereby people interested donate a dollar a month.

He said that soon they will begin to prepare bags with rice and lentils, to which they add condiments, to distribute in places like Maracaibo, where community groups come together to prepare the so-called “pot of mercy”, to feed children and old people.

Venezuela is experiencing a serious economic, political and social crisis. For almost three months, the country has been the scene of almost daily opposition demonstrations demanding the release of President Nicolás Maduro, who is responsible for the country’s food and drug shortages and accusing the state of running over Of law.

The ruling has reacted to these marches with concentrations and demonstration of strength in Caracas and other cities of the country.

A total of 76 people, according to the Office of the Prosecutor, have died within the framework of these demonstrations, for and against the Government.