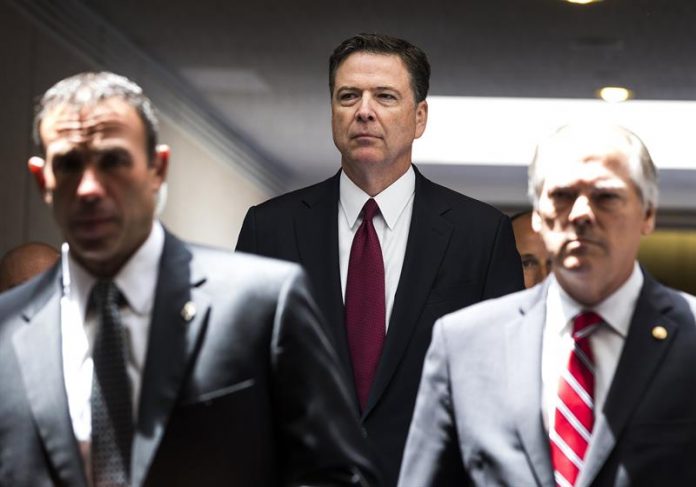 Former FBI Director James Comey today accused President Donald Trump of “lying, plain and simple” and, after telling the Senate about the “troubling” situations he experienced with the president, he trusted that the special prosecutor for investigating Russia, Robert Mueller, determine whether it incurred “obstruction of justice”.

During his expected hearing before the Senate Intelligence Committee, Comey described his encounters with the tycoon and wished there were recordings of them, the existence of which Trump hinted at a few weeks ago.

“I’ve seen those tweets, my God, I hope you have tapes,” comey exclaimed when asked about it, minutes before confirming that he himself allowed the leaking of the notes he had taken from his conversations with the agent through a friend .

Comey confessed to having leaked those notes to “push for the appointment of a special prosecutor” to investigate the possible collusion between Trump’s campaign and the Russian government to interfere with last year’s presidential election.

“I was honestly worried that he might lie about the nature of our meeting,” said the former director of the Federal Bureau of Investigation (FBI). “I knew there might come a day when I might need a record of what happened not just to defend myself, but to defend the FBI.”

Trump unexpectedly dismissed the senior official on May 9, prompting strong controversy as many interpreted it as an attempt to curb Comey’s polls on alleged links between the tycoon’s campaign and the Russian government to hurt To his Democratic rival, Hillary Clinton.
Comey agreed today with that interpretation.

“I do not know why I was fired. I take the president his word that I was fired for the way he was conducting the Russian investigation and the pressure that this exerted on him,” the veteran official said today.

In an interview with NBC after the dismissal, Trump said that “the Russian thing” weighed on his decision to dismiss the FBI director, while adding that the investigation into the possible coordination of his campaign with Russia was a ” “.

Comey opined today that possibly Trump “was frustrated because the Russian research was taking too much time and energy in the public sphere.”

In his written testimony to the Committee, which was revealed Wednesday, Comey details the scenes in which he had contact with the president, including two episodes in which, unexpectedly for him, the president managed to be alone.

Comey considered “significant” the fact that he did not want witnesses on what he wanted to address with him, and stressed this fact before the senators.

In one of those face-to-face encounters, Trump asked “loyalty” to the then-director of the FBI and also asked him to “leave” the investigation of his national security adviser Michael Flynn for his alleged ties to the Kremlin.

According to his account, the senators directly asked Comey if he considered that the president had obstructed Justice, something that he preferred to leave to Mueller.

“I do not think it’s up to me to consider whether the conversation I had with the president was an obstruction effort. I took it as something very disturbing, very disturbing, but that’s a conclusion I’m sure the special prosecutor will work on,” he said. He said.

An indictment of obstruction of justice may lead to a process of dismissal of the president, a political trial advocated by some Democratic opposition lawmakers, paralleling the Watergate scandal, which forced the resignation of former President Richard Nixon (1969-1974) ).

In response to Comey’s revealing intervention, the White House decided to be one of Trump’s personal lawyers, Marc Kasowitz, to respond to the press, although Deputy White House spokeswoman Sarah Huckbee Sanders was quick to say that the tycoon “Is not a liar”.

In an unsolicited appearance, Kasowitz denied the major and claimed that Trump “never” asked “loyalty” to Comey, nor did he advise him to “let go” of Flynn’s case and called the former FBI’s leaks as “surreptitious, unilateral And unauthorized. ”

Former FBI Director James Comey explained today that he documented his solo encounters with the president, Donald Trump, because he feared that he would later “lie” about the content of his talks.

“I was honestly worried that he might lie about the nature of our encounter,” said the former director of the Federal Bureau of Investigation (FBI) during his long awaited hearing before the Senate Intelligence Committee.

“I knew there might come a time when I might need a record of what happened, not just to defend myself, but to defend the FBI,” he told sworn-in senators.

The ex-director of the Bureau also said that he only met with former President Barack Obama three times in his eight years in office, and that he never felt the need to document his meetings with him, just as he did not while he was a senior Justice Department at the time of Republican President George W. Bush.

Comey insisted Trump had acknowledged his good performance at the front of the FBI on several occasions, including a moment when he whispered to him in a hug at the White House that he “was looking forward to” working with him.

“I do not know why I was fired,” he said when asked. “Maybe because of the way he ran the Russian investigation (about Russia’s alleged interference in the 2016 elections) and the pressure it had on him,” he added.

Comey was fired a month ago by the president, whose team gave contradictory arguments to explain the president’s decision.