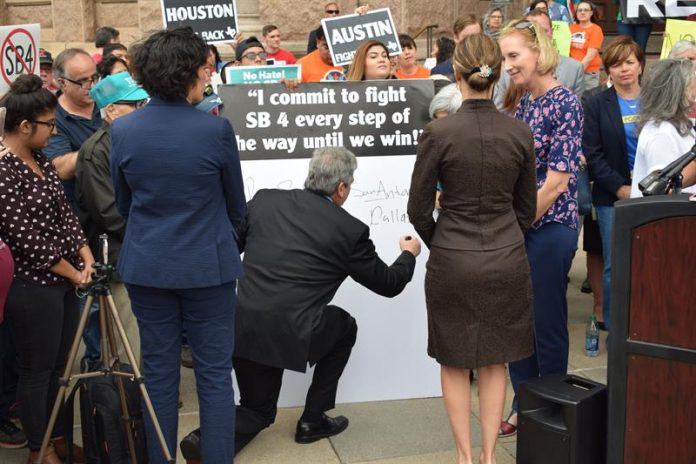 Texas’s large cities will file a lawsuit against the state of Texas over the recently ratified law by the state governor, which prohibits “sanctuary cities” and allows local authorities to question the immigration status of any detained person.

This was announced today at a press conference in front of the Texas Capitol several representatives of the capital, Austin, the border El Paso, and Dallas, while members of Houston and San Antonio said they are also studying several possibilities in this sense.

Among others, Austin Mayor, Democrat Steve Adler; The councilman of the city of San Antonio, King Saldaña; Travis County Judge Sarah Eckhardt; David Stout of the El Paso County Commissioner; Houston Councilman Robert Gallegos; And Philip Kingston of the Dallas City Council signed a whiteboard where you could read: “I promise to fight SB4 every step of the way until we win!”

“We are not going to sit idle by a law that is racist and unconstitutional and betrays a large part of our community,” Austin City Councilman Greg Casar said on the stairs of the government building.

Although he said he could not give more details on the legal strategy to curb the law, he said that the resources will be ready before September 1, the date scheduled for the law to come into force, as stipulated by the rules of Texas law.

In this regard, Stout, of El Paso, said the border city will file a court order next week, after yesterday the local commissioner approved to file a lawsuit of unconstitutionality against this controversial law.
“We will fight tooth and nail until this law is six feet underground,” exclaimed the El Paso representative.

The law includes an amendment that will allow police officers to question the immigration status of people detained in Texas.

According to this addition, very similar to one approved in Arizona in 2010 popularly known as “show me the papers,” law enforcement officials will be able to ask about the immigration status of people who, for example, arrest a traffic issue.

Kingston, of Dallas, called the law “immoral” and announced that the city council will discuss next week how to address this situation in court to end this legislation.

“We have a lot of legal resources to deal with the state,” said the councilman, who said it was time for all Texas big cities to stand together against a Gov. Gov. Abbott, a Republican who is turning the dream into a ” less safe”.

For Gallegos of Houston, this “discriminatory and racist” law makes communities “less secure” and affects only the relationship between local police and immigrant communities.

In addition to the local authorities, several state representatives showed their disagreement with the new regulation during the press conference.

In the same vein, the legislator for Dallas and president of the American Mexican Legislative Caucus, Rafael Anchía, said that Abbott “continues to criminalize the Latino immigrant community for political gains,” instead of worrying about real aspects of security from Texas.

Many municipalities across the state are expected to approve resolutions in the coming weeks expressing their intention to support the litigation to challenge SB 4 and reaffirm their commitment to policies that respect the links between the police and the communities they serve .

His actions mark the beginning of a “summer of resistance” against SB 4, with a series of litigation, protests and other actions scheduled in the solitary star state.

Texas is at the center of the national debate following the signing of this controversial law, which was one of the state’s legislative priorities.