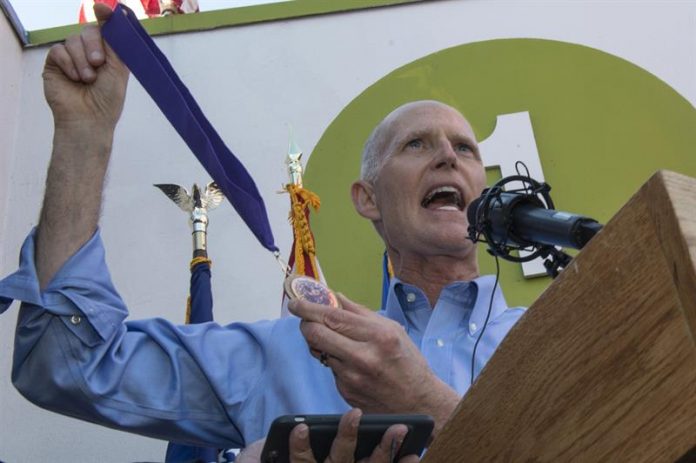 “Maduro and his followers have to resign now,” said Governor Scott during the demonstration outside a popular Venezuelan restaurant, which was attended by dozens of immigrants from that country.

Scott, who began his speech with a few sentences in Spanish, urged Maduro to release “today” Lopez and all political prisoners.

The Republican criticized that the situation in Venezuela is “terrible”, that “there is no justice, no peace and no democracy” and that children lack food and medicine.

In the midst of Venezuelan slogans, the Republican gave Carlos Vecchio, coordinator of the Popular Will party in Miami, the Freedom Prize awarded in the distance to López.

Scott said that in Florida “we worry about what happens in Venezuela” and that “it is an honor to recognize Lopez, leader of the People’s Will,” for his work to promote democracy. ”

The governor then greeted by telephone and from the atrium to the wife of Lopez, Lilian Tintori, who from Venezuela said through the loudspeakers that they will keep the protests.
“My heart is with you and yours,” the governor tried to say in Spanish, who was accompanied by Carlos López-Cantera, the state’s deputy governor, and the former Florida Lincoln Lincoln Diaz-Balart.

Meanwhile, Vecchio said that if Lopez was present to receive the homage he would dedicate it to “all Venezuelans.”

“I would dedicate it to all those who have fought and died for democracy. This belongs to them,” Vecchio said.

The so-called Concentration for Freedom of Lopez took place in front of a well-known Venezuelan restaurant in Doral, a city with an important community of that origin.

The Venezuelan opposition said that the message “essential of Leopoldo” is that he is resisting in jail and that everyone should resist in the streets of Venezuela.
“These deaths are not going to be in vain,” added Vecchio.

For his part, Cantera thanked the opponents for “being fighting for freedom,” and Doral Mayor Juan Carlos Bermúdez, who was also present, said that today’s demonstration “is a clear message to the dictatorship of Maduro” .

López has been in prison since 2014 and is the best known of the political prisoners in Venezuela.
In September of 2015 he was sentenced to 13 years and 9 months in prison accused by the call of a manifestation in which three people died in 2014.

Since his arrest he is in the military prison of Ramo Verde, outside Caracas, where he was visited by his wife on Sunday, who was able to confirm that he is “alive” and “strong” and thus deny information that he had been transferred to A hospital for serious health problems.