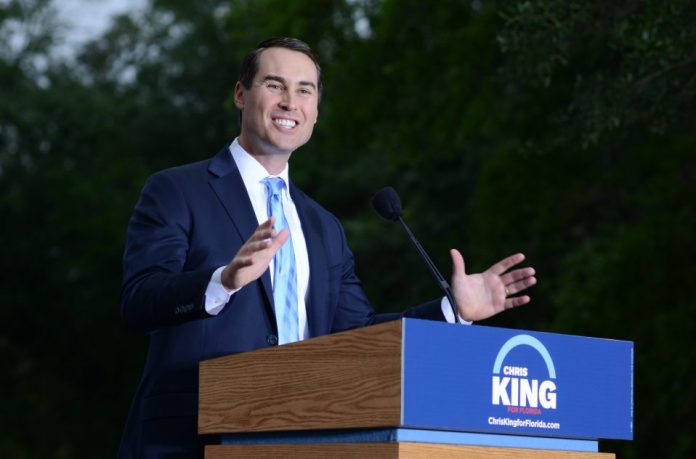 Orlando, Florida – Calling on his fellow Floridians to join him in rising up to help the state lead again, Orlando small businessman Chris King, today, announced his campaign for governor. Speaking before nearly 500 supporters at a senior affordable housing complex he revitalized, King, a Democrat, laid out the need for a new kind of leadership in the state:

“Friends, my mission is clear — to change our one-party state government and help Florida take the lead again. My call to public service has also been clear. I am stepping forward now because our time cries out for new leadership with fresh ideas. I am running for this job because I believe too many Floridians have been left out and left behind. This is the job that can actually do something about it.

“There will be those that argue that a lifetime in political office prepares them for this job; I believe that it was traditional political experience that got us into this mess and it will be fresh ideas and new leadership that will get us out of it…  The true challenge for Democrats is to offer something different, not a little different, but way different.”

“As your next governor, I’ll launch an economic plan called ‘Homegrown Florida’ that will rely less on the artificial sweeteners to buy an economy and more on the real protein to grow an economy. A plan that will focus less on showering love, attention and cash incentives on giant out-of-state corporations, and more on elevating Florida’s working families.”

King’s “Homegrown Florida” plan will, among other things, include:

A political newcomer, King said his campaign would need to be different and rely on a movement of people ready to change the direction of the state:

“I want this campaign to elevate the way our leaders serve you, and in so doing, to energize millions of Floridians to rise up and help Florida lead again.

Born in Orlando, King is a third-generation Central Floridian. He graduated from Harvard University and earned his law degree from the University of Florida.

Over a dozen years ago, with the idea that businesses had a responsibility to do well and do good, King and his brother started Elevation, a company that provides seniors across the state and Southeast affordable housing options.

With his family, King started several charitable efforts to serve their community including the Elevation Scholars program, which provides college scholarship opportunities to low-income students in Orange County. The Elevation Global Initiative funds family farming and environmental efforts in Haiti, entrepreneurship training in East Africa and prisoner rehabilitation in US prisons. He also helped launch the Elevation Academy, a school in Kinshasa, Democratic Republic of Congo that serves 700 low-income students.

King attributes his commitment to service to his family and faith. His father, David King, led the successful battle against illegal gerrymandering in Florida. His mother has been an advocate for patient-first healthcare for 30 years, serving as Chairman of the Board of Directors of Orlando Health, a non-profit family of hospitals in Central Florida, and as one of the early founders and first chairman of Grace Medical Home, an award-winning free and charitable clinic in Orlando.

King met his wife Kristen when he was 15 years old — they were high school sweethearts. Chris and Kristen are raising their three children in Orlando.