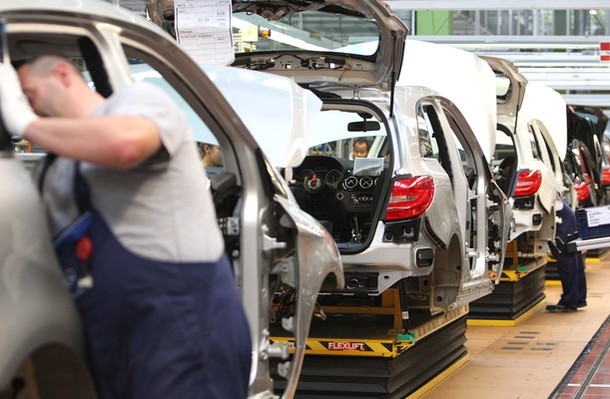 Detroit, the once-thriving capital of the US automobile industry, has seen most of its jobs move overseas, leaving the remaining workers at the “Big Three” auto plants wondering about the future.

As the jobs have vanished so has the security and benefits they once offered that helped make the American middle class the engine of the world economy.

When Janet Parker, 46, learned she would be hired by Ford, she was sure it meant the start of a worry-free working life. Eight years later, she is disillusioned.

“Things have changed for the worse,” said Parker, who works in a plant building axles and is still not entitled to employee benefits.

“It’s declined for a lot of the employees.”

The lack of certainty auto workers have in their future is a persistent burden, and efforts by the once-powerful United Auto Workers labor union to stem the tide have borne little fruit.

Parker says that income from her husband’s job at a Fiat Chrysler plant is what allows her to make ends meet.

“I don’t make enough money to do everything we do,” she said. “It if wasn’t for him, I’d be riding a bike.”

The downhill slide for US auto workers began after 2000 and gathered pace in 2009 with the near-collapse of the Big Three — Ford, GM and Chrysler — during the global financial crisis.

That year, GM and Chrysler declared bankruptcy and were taken over by the federal government as part of a highly unpopular, $80 billion taxpayer-funded bailout. Ford also laid off thousands of workers and shuttered factories.

“Our plant was always working. You could count on that,” said Michael Gilliken, a team leader at a factory making the popular Ford F-150 pickup. But starting in 2005, overtime ended, the first warning sign.

-‘You start to get frightened’ –

One by one, such perks and benefits as free meals and training centers — which had convinced young generations in the region to forgo higher education and follow in the footsteps of their parents — began to disappear.

“It shocked us. We were not prepared for that,” said Gilliken, a father of five who managed to save his job thanks to his seniority.

Gilliken had to accept a freeze on pay raises and a pay cut.

While the 2008 crisis did force the Big Three to cut production, automation, competition from Asia and the free-trade pact linking the United States, Canada and Mexico also put dents in the domestic industry.

“The trade agreements have caused wage suppression,” said Scott Houldieson, a regional UAW executive and employee at a Ford plant in Chicago.

As for Gilliken, he blames “bad management decisions” and the fact that Detroit made cars that often did not appeal to the consumer: “We did quantity, not quality.”

“When the Japanese saw they could build a cheaper, better car that can last longer, the average American says, ‘Why wouldn’t I buy it?'” he said.

As a result, while GM and Ford remain the two biggest sellers of cars and trucks in the United States, Toyota is hot on its heels while Fiat Chrysler is neck-and-neck with Honda and Nissan.

Gilliken also expressed frustration with southern US states, where foreign auto makers such as Volkswagen have opened factories to take advantage of an anti-union environment where they can impose lower salaries.

While the 2012 comeback of the American car helped stabilize the workforce and led in 2015 to the first rise in wages for a decade, workers find themselves on no surer footing.

A new recruit earns between $14 and $20 an hour with no retirement benefits and often no health coverage, and must wait years before collecting other benefits.

– Hoping for a long future –

“When I started off, you had to work 90 days to get entitled to the benefits,” said Jeff Brown, who works at Ford’s assembly plant in Flat Rock.

Ford has just announced a $700 million investment in Michigan in the face of President-elect Donald Trump’s public strong-arm tactics with major auto makers who planned to sell Mexican-made cars on the US market.

Workers interviewed by AFP appeared resigned. While they did not express support for Trump, they hailed his displays of protectionism. Parker, the Ford employee, said Trump’s policies could ultimately help her keep her job.

After being carried by Democrats in every presidential election since 1988, in November Michigan narrowly tilted toward Trump, who eked out a victory by 0.2 percent of the ballots cast in the state.

“I am hoping there is a long future in the plant,” said Brown. “People are always worried that the plant might shut down because Ford has done that in the past.”