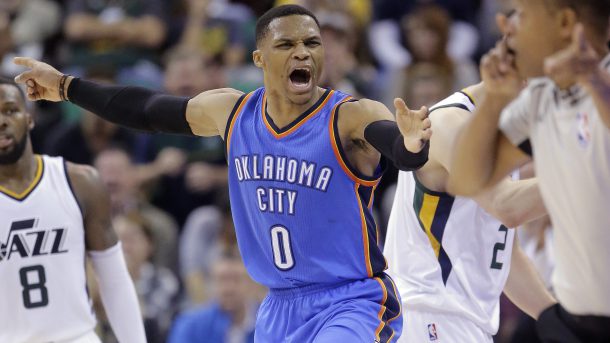 Russell Westbrook has now gone three straight games without a triple-double, which is his longest streak without achieving the feat in more than a month – which is amazing.

Westbrook – averaging 30.5 points, 10.6 assists and 10.5 rebounds per game – is on pace to join Oscar Robertson as the only players to average a triple-double for a full season. Westbrook has nearly as many triple-doubles this season (12) as the rest of the NBA combined (16). His seven-game triple-double streak, the longest since Michael Jordan, was widely celebrated.

But with the Thunder hitting a small rough patch – losing to the Trail Blazers by 19 and Jazz by 20 the last two days – Westbrook wants to find a new topic.

Westbrook, via Fred Katz of The Norman Transcript

“I just know, go out and play every night. That’s it,” Westbrook said. “I really don’t care what people think is real and what’s not. I just go out and compete, and that’s it. Honestly man, people in this triple-double thing is kind of getting on my nerves, honestly.

If Westbrook doesn’t want people to talk about triple-doubles so much, he shouldn’t chase them.

Yes, Westbrook breaks from the script to seek double-digit rebounds and assists – and his teammates help. They box out for him to pull rebounds from them and shoot off his passes when it isn’t always wise.

Sure, there are advantages to this style. Westbrook can turn a defense rebound into an attack on the other end more quickly than anyone in the league. Westbrook dominating the ball offensively, either shooting himself or setting up the shooter, isn’t a half-bad offense considering the rest of Oklahoma City’s roster.

But also believe this: If triple-doubles weren’t a statistical accomplishment anyone noticed, Westbrook would play differently.

That hardly makes him unique. Draymond Green, LeBron James and countless others have chased triple-doubles. Westbrook’s natural play just gets him close enough to chase more often, and he indulges that temptation for statistical accomplishment.

When it works – the Thunder are 28-3 in his triple-double games the last two years, including playoffs – Westbrook seems proud, though he always downplays his individual statistics. When it doesn’t, he suddenly blames anyone discussing it. If everyone ignored his triple-doubles going forward, I wonder how that would go over.